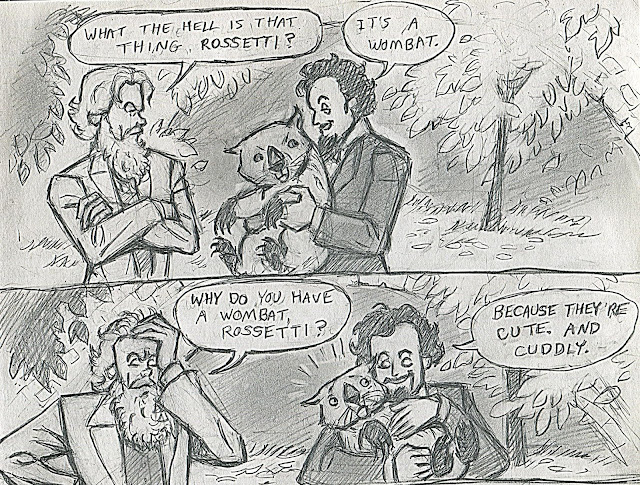 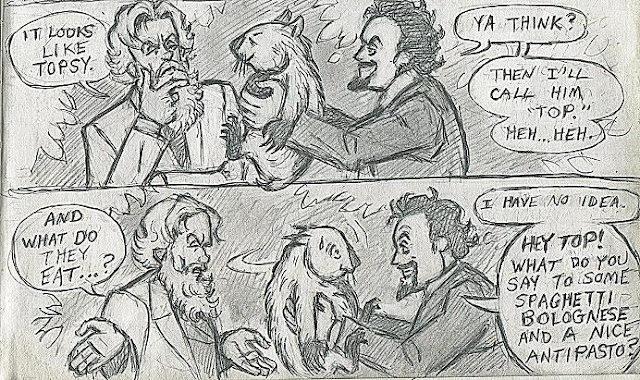 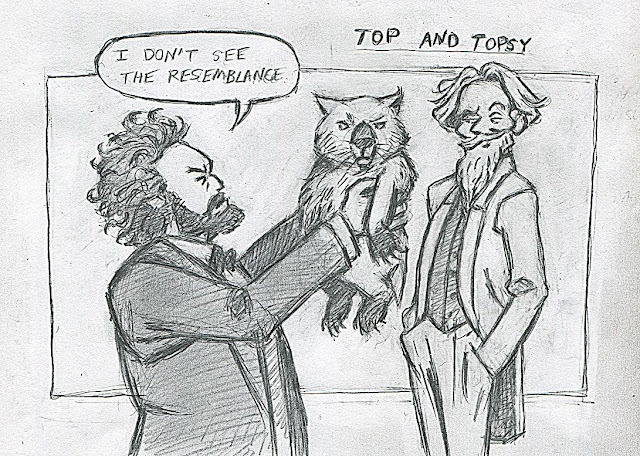 "The wombat is a joy, a triumph, a delight, a madness." -- Dante Gabriel Rossetti.

I decided to have Rossetti explaining his love for wombats to William Holman Hunt who is famously seen as being very unsympathetic to animals. (Poor goat...) 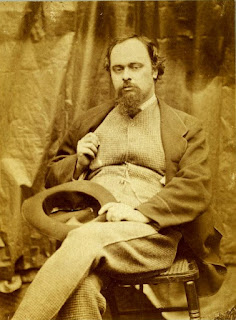 Rossetti especially fancied exotic animals and most of these were obtained from the infamous Jamrach's,  http://en.wikipedia.org/wiki/Charles_Jamrach,  a shop that supplied Victorian England with a plethora of strange critters alien to their shores.

After awhile, Rossetti had the neighbors near his home in Chelsea complaining about noises and nuisances caused by, among other creatures: kangaroos and wallabies, an armadillo, a raccoon, a deer, owls, a woodchuck, peacocks, a Japanese salamander, a zegu, two laughing jackasses, a Brahminee bull, etc. He even inquired into getting an African elephant and let's all hope he was just joking about that.


But he had two wombats and the short-lived Top was one of them. (It's rumored he met his demise eating a box of Rossetti's expensive cigars. )

When Rossetti observed his cute, roly-poly wombat, he settled on what he thought was an appropriate name:
Top.

Luckily William Morris good-naturedly let a lot of the jokes made at his expense roll off his back (He had to put up with years of Edward Burne-Jones' cartoons and practical jokes, after all...)
However, Rossetti's humor at Topsy's expense was a bit more barbed-- Rossetti was quite infatuated with Morris' wife, Jane, and the two would have an affair for years.

And Morris was sadly quite aware of it.


Wombats provided a lot of inspiration for Rossetti and friends. There was discovered to be many cartoons of wombats underneath the faded Oxford Union murals that Rossetti and some other Pre-Raphaelite pals were commissioned to paint. The bulk of these were by Ned Burne-Jones, who was deemed the best at wombat-portraiture of the gang.

An example of some of Ned's wombat art:
﻿﻿ 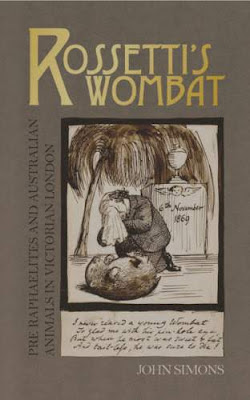 For more than you ever wanted to know about wombats and Australian animals in Victorian England, I recommend this book:
And rest assured that I, for one, will keep Top the Wombat alive and kicking for as long as I can here at Pre-Raphernalia.


Coming up next: Top the Wombat Daydreams...

Posted by Raine Szramski at 1:36 PM