The Triumph of Fanny 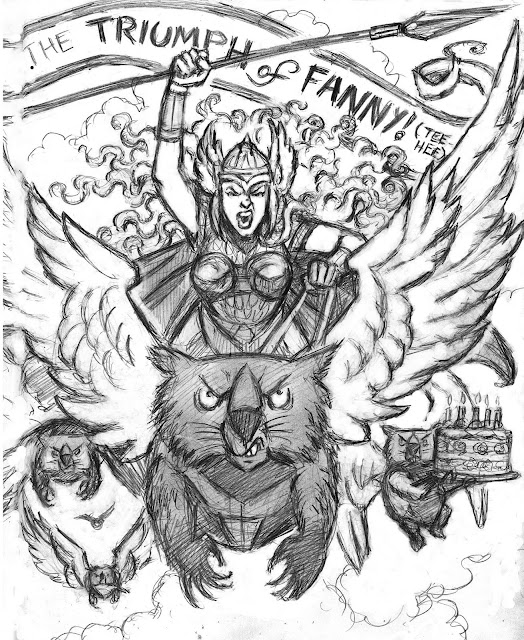 This is a cartoon I did almost a year ago for Kirsty Stonell Walker to celebrate her discovery of Fanny Cornforth's final resting place, thanks to her magnificent detective work and loyalty to this misunderstood muse of Dante Gabriel Rossetti's. (If you missed the excitement last year, read about it here in this article from The Guardian.) All this week, Kirsty has been hosting a Fanny-versary on her blog The Kissed Mouth.

The idea for this cartoon of Fanny as a valkyrie, accompanied by winged battle wombats (with cake, of course) was a group effort in a Facebook discussion thread during this time. There was also this quick cartoon done at the same time, which refers back to an older cartoon I did for Kirsty: 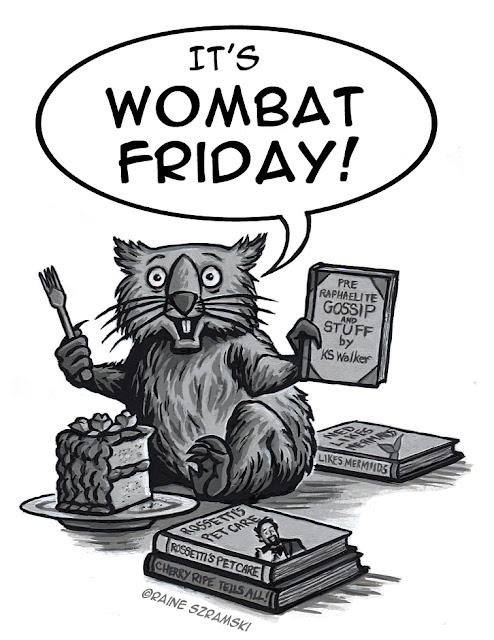 You know it's that time again!
This is is the newly inked version of my sketchbook cartoon. And  once more, if you don't know what Wombat Friday is, head over here! And especially here, where it all began.

The (Mis)adventures of Skater Morris 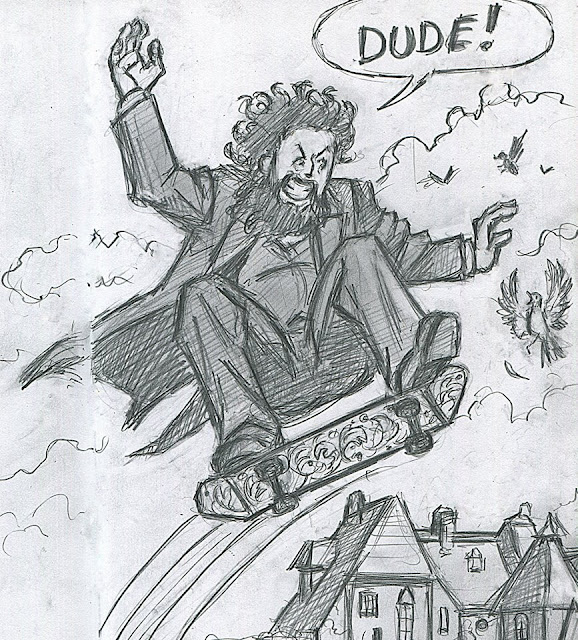 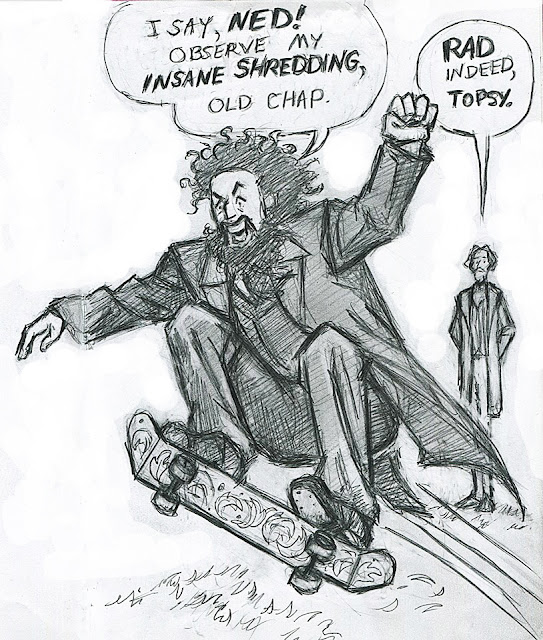 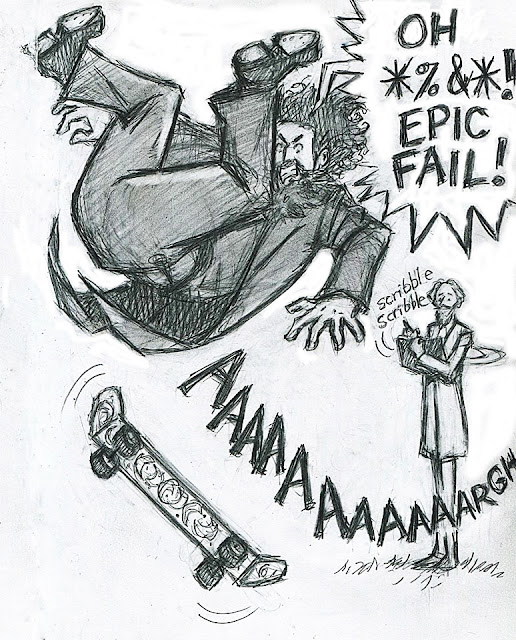 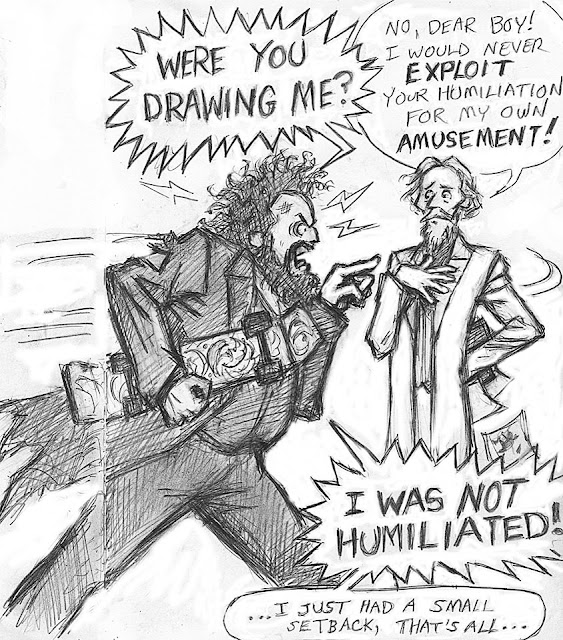 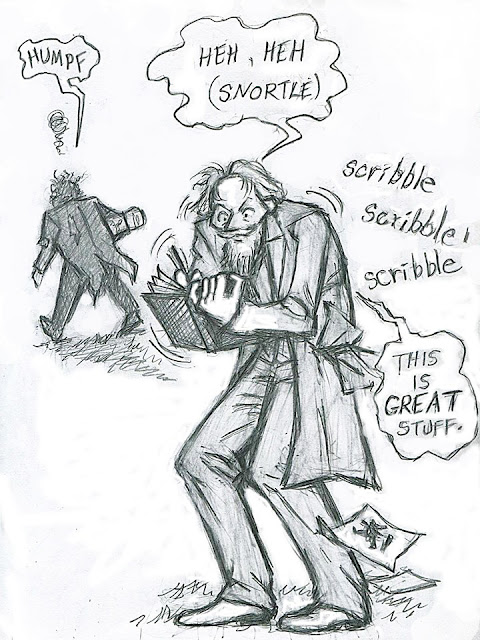 Because you demanded more Skater Morris! (No, you didn't, but let's just pretend you did...) Here is a sketchbook series of cartoons I did quite awhile ago which strangely hadn't made it to this blog yet, with the exception of the very first one.

Edward Burne-Jones, William Morris' best friend, notoriously sketched cartoons of Morris having "mishaps" for as long as they knew each other. It stands to reason that Topsy was aware of Ned's poking fun at him and tolerated it. Morris was a jolly fellow, after all.

The original idea of "William Morris On a Skateboard" came from Kirsty Walker's husband, Duncan, making a comment about Morris-patterned skateboards.
Which led to... well, this.

Some examples of Ned exploiting Topsy for his own amusement: 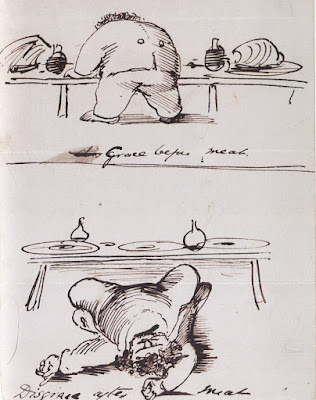 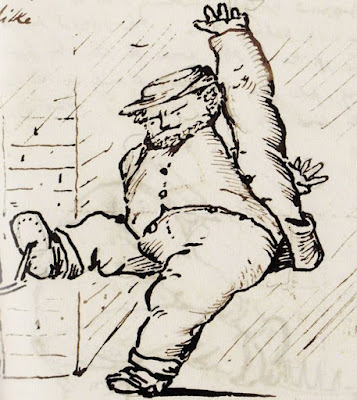 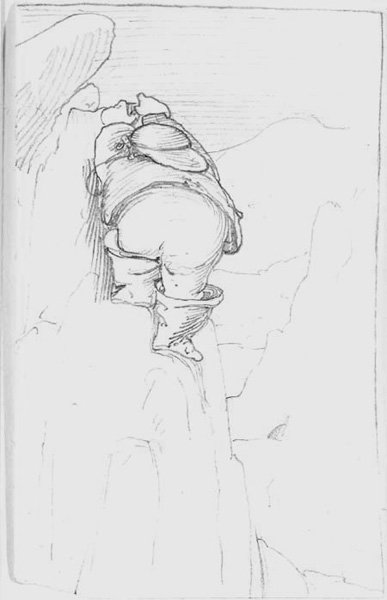 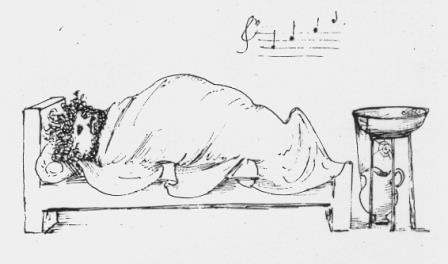 Posted by Raine Szramski at 10:14 AM No comments:

Fun with Top and Jane 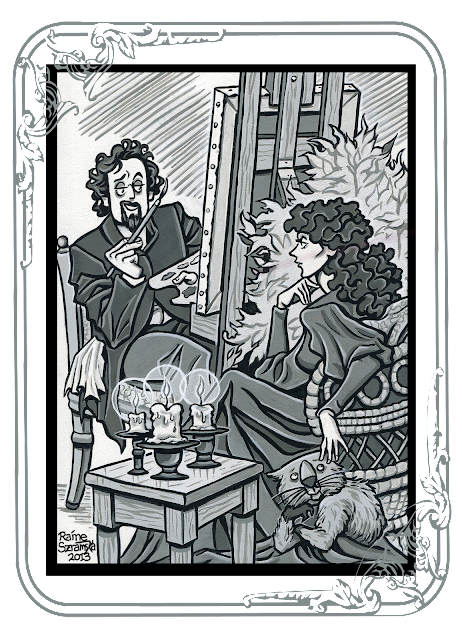 By request, I added my Jane/Rossetti/Top "love triangle" cartoon to Redbubble. 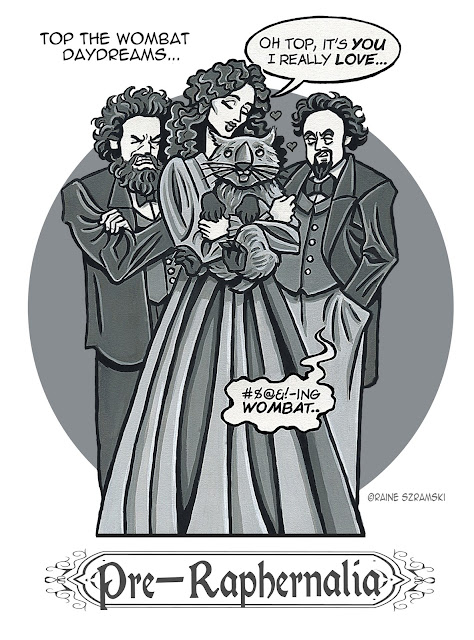 Make that a love quadrangle. (With added Topsy.)


Posted by Raine Szramski at 10:31 PM No comments: 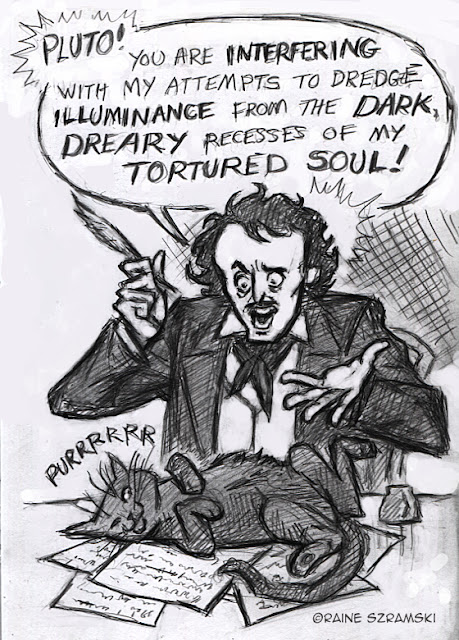 Edgar Allan Poe and the universal
problem of writers with cats.

A sketchbook drawing I did for Edgar Allan Poe's birthday yesterday. I have two black cats myself and I can personally relate to this happening a lot. Pluto's right eye is closed, not missing-- but he does look like he has one eye, as in the macabre story, "The Black Cat".

(Yes, I know I haven't been updating this blog as frequently as I'd like, but I have done quite a few more cartoons you haven't seen yet and I'll try to post them! Soon, she says...) 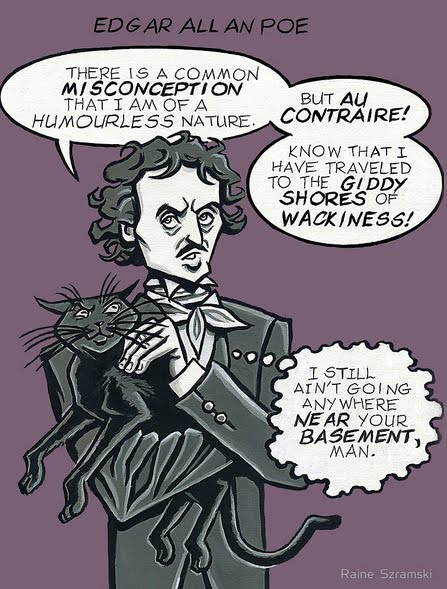 What's new: stuff in my Redbubble shop! I've been desperately trying to ink all my old cartoons and I've been taking requests for which ones people would like to see on t-shirts. (Upcoming: next will be The Stünners, Wombat Friday and Oscar Wilde.) If you have favorites to consider, please drop me a line!

Or just drop me a line anyway: I'd love to hear from you.

I'm also on Patreon now! For as little as $1 a month, you can help support me and Pre-Raphernalia, as well as get special goodies (and see why I've been so busy. Argh.).


Thank you once again and see you soon! 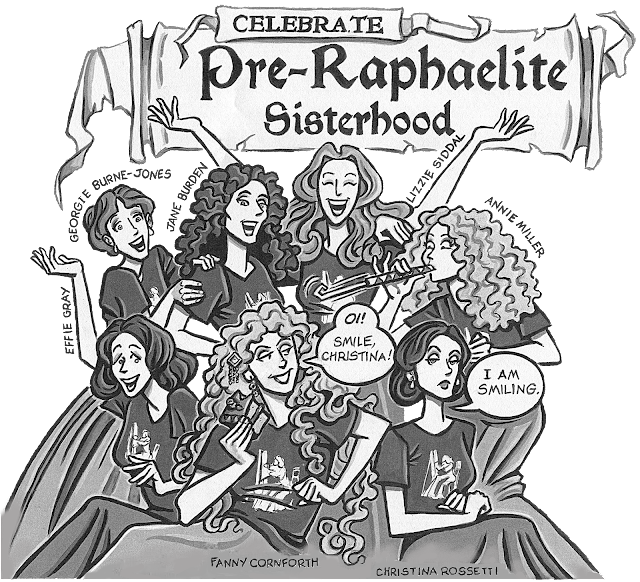 Our wonderful friend Stephanie Pina, whom everyone knows as the blogger of the internationally beloved Pre-Raphaelite Sisterhood (and lest we forget, the founder of Wombat Friday!) is in need of some very costly medical treatment. All my commissions for this special edition Sisterhood t-shirt will go to Stephanie’s fund: http://www.gofundme.com/t8yz2jw

The shirts are available in many different colors, sizes and styles. There are even prints, travel cups and throw pillows! (Hmm…actually could use an extra throw pillow myself…)
http://www.redbubble.com/people/rainesz/works/14784306-stephanie?p=t-shirt

Even if you can’t afford a t-shirt, please consider donating just a little to help her and her family in this rough time. And thank you so much on behalf of Stephanie and all of us, her friends and admirers! 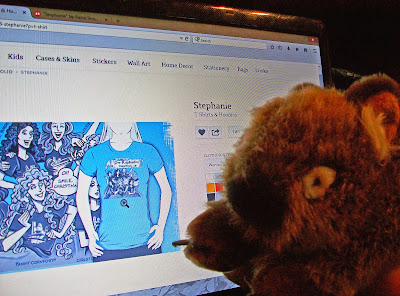 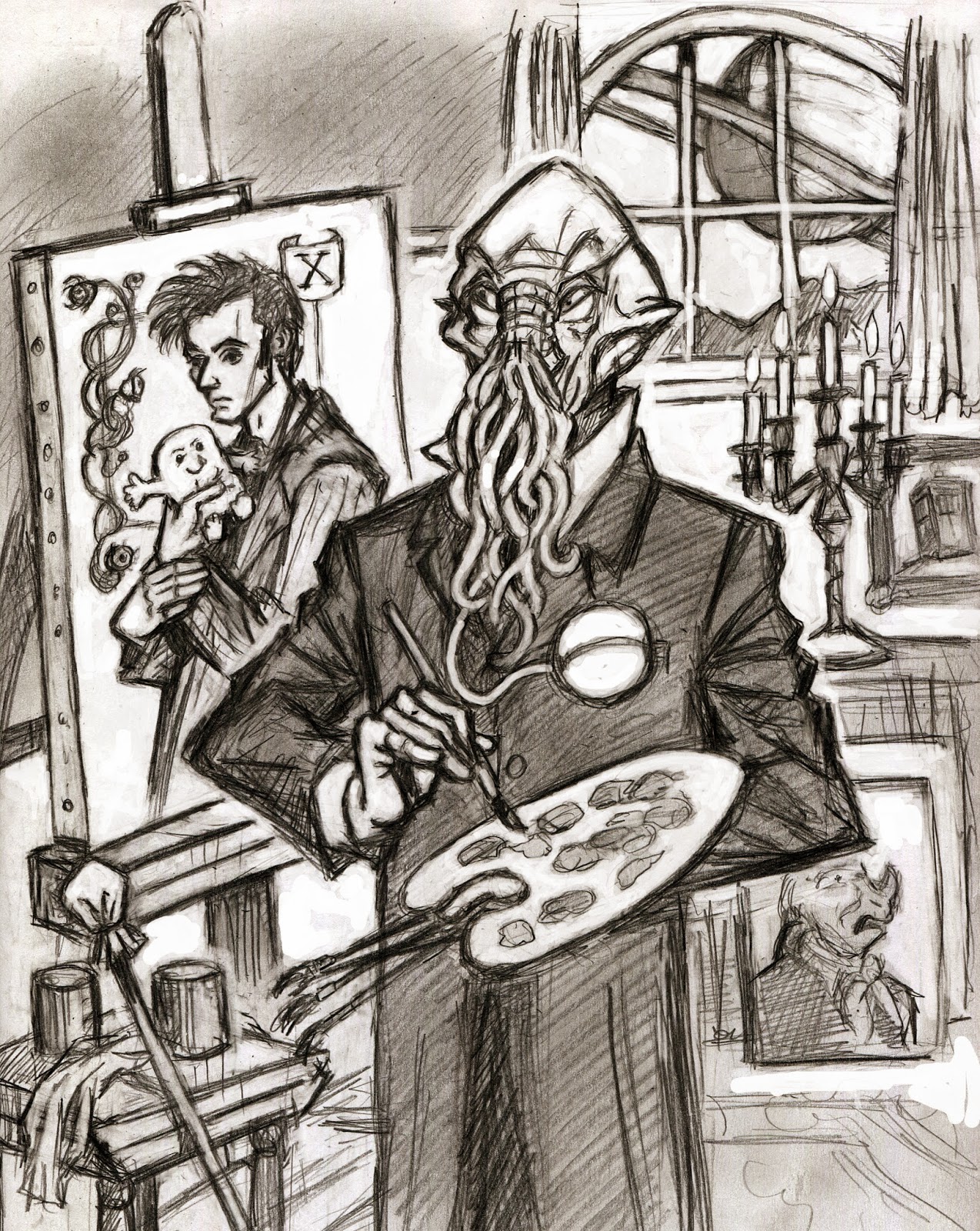 Sorry once more for having not posted new cartoons in awhile-- there are a few new ones but I've been pretty busy on other unrelated projects.

It's no secret I'm a huge Doctor Who fan and it isn't that often that I get to do mash-ups of Doctor Who and the Pre-Raphaelites, but here you go: a drawing made for my photographer friend Sandra Franklin. She's been kindly providing me with transatlantic Who goodies and we often trade services. She wanted a picture of an Ood and I suggested a PRB version. (Whovians will get the various references.)

Because David Tennant is her favorite Doctor, I had him stand in for Proserpine in Dante Gabriel Rossetti's painting.


I needed something roundish that he could hold instead of a pomegranate, so I chose an Adipose.
Hopefully soon, I'll have an inked version  of this sketch for Sandra done and I'll of course post it here.


I hope to return with more new cartoons soon...!