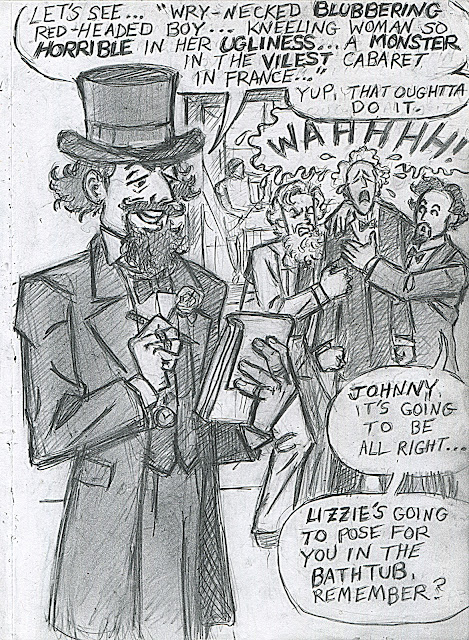 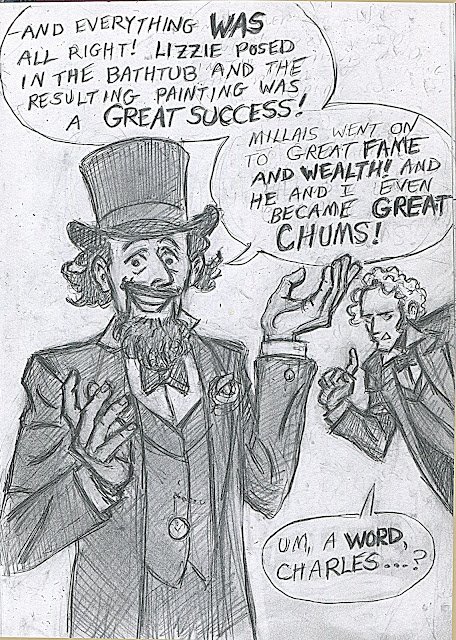 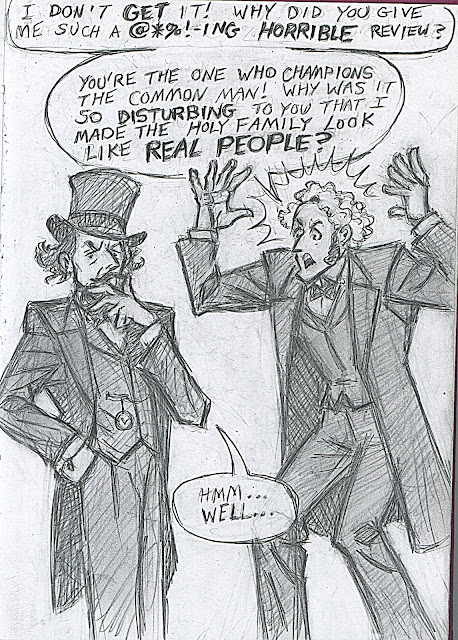 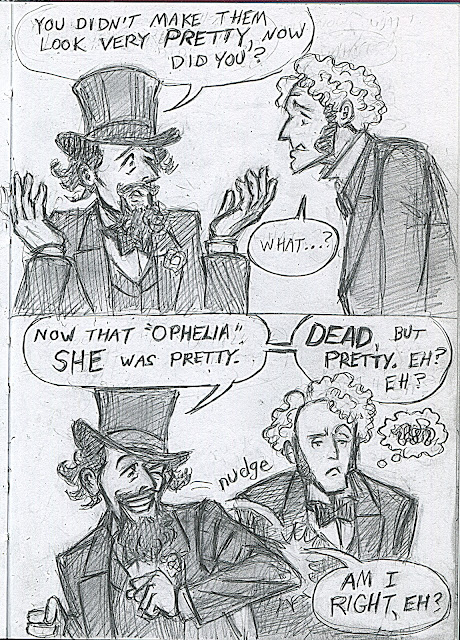 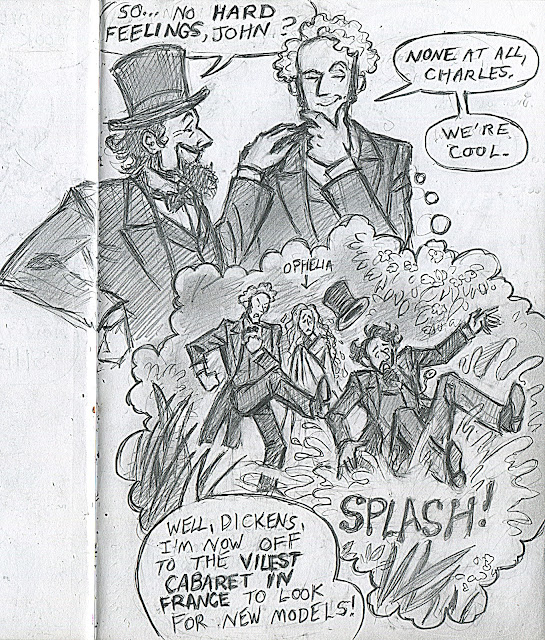 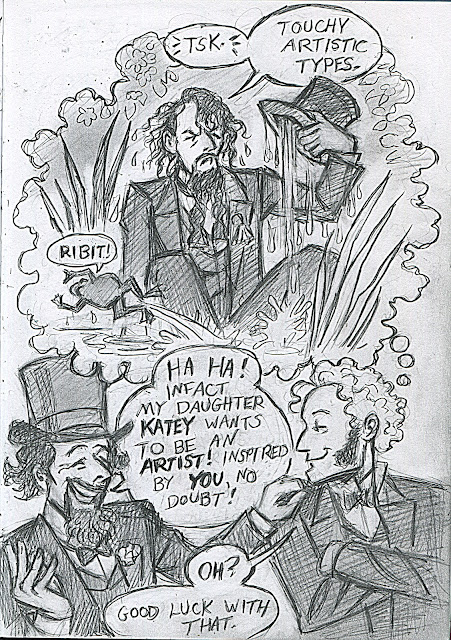 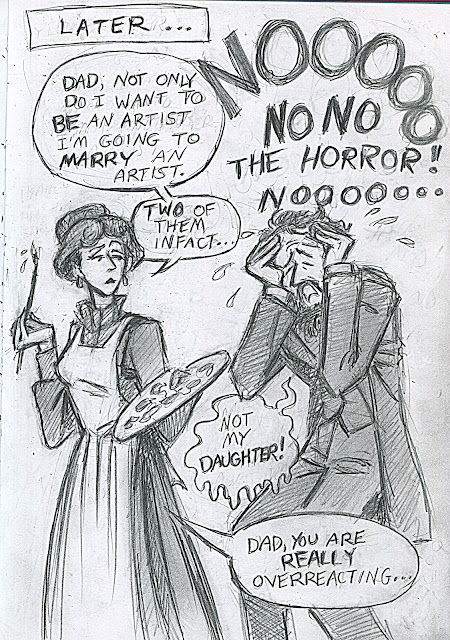 Years ago in my college art history class, we talked about the painting by John Everett Millais that is commonly called The Carpenter's Shop and our professor read us Charles Dickens' review of it. I remember wondering then just what was Dickens' problem. Ironically, he and Millais would go on to become good friends, but only after Millais had become reknowned for the style that Dickens originally found "revolting" and "repulsive".

I wanted to have Millais yelling in Dickens' face, asking him the questions I wanted to know. "You champion common everyday people in your stories yet you can't seem to tolerate them in artwork." It's probably because it wasn't what Victorian people were used to looking at in galleries-- paintings were their version of the cinema and they wanted to see pretty, glamourous people, not people who looked like themselves. Granted, the Pre-Raphaelites would later supply plenty of pretty, glamourous people, but Millais' talent would always be for catching realistic emotions and likenesses. This painting was just too "gritty" for the tastes of its age.

Don't get me wrong: I love Dickens. I have a shelf of books and biographies by and about him. But historically he could also be incredibly infuriating. Just ask his daughter Kate. Or his wife (Don't get me started.)

But tastes in art change and in 1850, the Pre-Raphaelite Brotherhood were seen as radical upstarts, wanting to take on what they saw as the stale and stodgy artistic restrictions of the Royal Academy to introduce a new way of looking at color, composition and subject matter. I'm sure they expected some scorn for going against the norm, but I don't think they were prepared for this.

It's hard to believe now, but this is the painting that was seen as so shocking:
﻿
Queen Victoria even asked to have a private showing of this painting at Buckingham Palace in order to judge how truly terrifying it was to the public. (Millais would later find this all incredibly amusing, even if the Queen didn't.)

What was probably considered so offensive about this painting was that ordinary, un-idealized people were chosen as the models to play the members of Christ's family. Millais had gone very "method painter" for this one, sketching industriously for hours in a real carpenter's shop, even bringing home to his studio wood shavings and sheep's heads (ugh) for authenticity. He enlisted his relatives to model for his subjects and I'm sure they weren't exactly thrilled later when they read how their physical appearances were described by one very notorious reviewer...
﻿﻿


Millais  seemed to get the lion's share of attention, both good and bad, in the early days of the PRB. On top of this particular painting's hyper-realism, it was also steeped in religious symbolism that would become the trademark of Millais' best buddy, William Holman Hunt. (You can see a lot of  Hunt's thematic influence on early Millais.) But Millais and his painting hardly seemed to deserve what got thrown at it...


...Because it was Charles Dickens, the most famous man in England, who set his journalistic eye on this "new style" of painting and in particular, this former child prodigy of the Royal Academy.

I give you Dickens' review of the picture in its near-entirety: 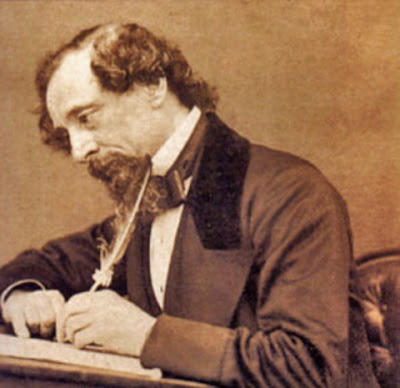 
"You come in this Royal Academy Exhibition, which is familiar with the works of WILKIE, COLLINS, ETTY, EASTLAKE, MULREADY, LESLIE, MACLISE, TURNER, STANFIELD, LANDSEER, ROBERTS, DANBY, CRESWICK, LEE, WEBSTER, HERBERT, DYCE, COPE, and others who would have been renowned as great masters in any age or country you come, in this place, to the contemplation of a Holy Family. You will have the goodness to discharge from your minds all Post-Raphael ideas, all religious aspirations, all elevating thoughts, all tender, awful, sorrowful, ennobling, sacred, graceful, or beautiful associations, and to prepare yourselves, as befits such a subject Pre-Raphaelly considered for the lowest depths of what is mean, odious, repulsive, and revolting.


"You behold the interior of a carpenter’s shop. In the foreground of that carpenter’s shop is a hideous, wry-necked, blubbering, red-headed boy, in a bed-gown, who appears to have received a poke in the hand, from the stick of another boy with whom he has been playing in an adjacent gutter, and to be holding it up for the contemplation of a kneeling woman, so horrible in her ugliness, that (supposing it were possible for any human creature to exist for a moment with that dislocated throat) she would stand out from the rest of the company as a Monster, in the vilest cabaret in France, or the lowest ginshop in England.
"Two almost naked carpenters, master and journeyman, worthy companions of this agreeable female, are working at their trade; a boy, with some small flavor of humanity in him, is entering with a vessel of water; and nobody is paying any attention to a snuffy old woman who seems to have mistaken that shop for the tobacconist’s next door, and to be hopelessly waiting at the counter to be served with half an ounce of her favourite mixture. Wherever it is possible to express ugliness of feature, limb, or attitude, you have it expressed. Such men as the carpenters might be undressed in any hospital where dirty drunkards, in a high state of varicose veins, are received. Their very toes have walked out of Saint Giles’s."
﻿
﻿﻿

And Dickens goes on that soon there will be a Pre-Galileo Brotherhood (the PGB, no doubt) who will want to take science back to the days when the sun revolved around the earth. Yes, you're very funny, Charles. Anyway...
﻿
...But it was respected art critic John Ruskin who came to the rescue of the flabbergasted PRB and countered Dickens' dreadful review by defending the young artists. Ruskin especially took Millais under his wing (which would of course lead to certain future complications...)

As the Pre-Raphaelites would eventually start gaining fame and success, they would also become more respectable. (Well, almost. Rossetti was always on the fence...) Johnny Millais would someday become Sir John Everett Millais, the first artist ever to be given a baronetcy. But until this happened, he got invited to a lot of parties.
﻿
It so happened that he was friends with writer Wilkie Collins (The Woman in White) and his brother Charles, who was a painter and a potential Pre-Raphaelite brother.

Both men were also good friends with Charles Dickens. 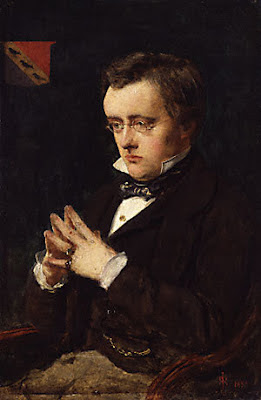 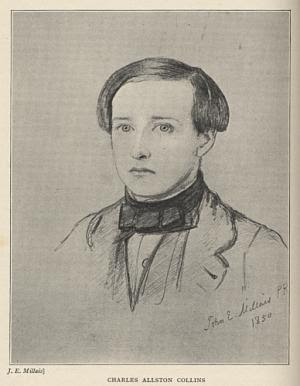 The Collins brothers: Wilkie (left) and Charles (right). Both portraits by Millais.

They desperately wanted to patch up the rift between the Most Famous Man in England and the painter of the beloved Ophelia. Dickens cordially sent Millais an article about the London fire brigade (the subject of one of Millais' next paintings), along with a peculiar apology:


"Objecting very strongly to what I believed to be an unworthy use of your great powers, I once expressed objections in (this) same journal. My opinion on that point has not in the least changed, but it has never dashed my admiration of your progress in which I suppose are higher and better things..." (source: John Everett Millais: A Biography, by G.H. Fleming)

So in other words, Dickens believed Millais was not using his superpowers for Good, plus he was probably hanging around too much with the Injustice League.


Patching up (a bit) with Dickens led to Millais using Dickens' daughter Kate, also a budding artist, as a model for his painting, The Black Brunswickers.
﻿﻿﻿


Not long after this, Kate would hurriedly marry Millais' friend Charles Collins, much to her father's near-hysteria because he believed his favorite child was only getting hitched in order to get away from him and the increasingly troubled Dickens household. (That's a long story in itself; see again link about Dickens' wife...) Kate's marriage to Charles was not a happy one, and he died young. Kate woud go on to marry yet another artist, the Italian-born painter Charles Edward Perugini. As Kate Perugini now, Kate's own career as a artist would finally flourish.

Of course, at the end, the irony of all this was that Millais was the artist who was called in to draw Dickens' official deathbed portrait. Millais, always a gentleman, by this time had forgiven Dickens for that horrible review. 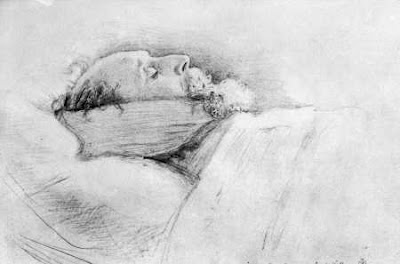 Maybe I'm having a harder time with it.

But then again, Millais had superpowers.

Coming up next: Georgie's Birthday.
Posted by Raine Szramski at 1:16 PM