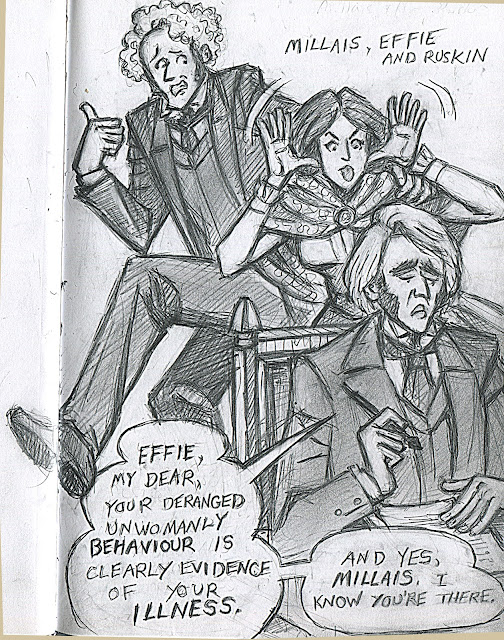 Probably the next sketch that will get inked...


After the Topsy/ Rossetti/Jane love triangle, this is the most famous other  Pre-Raphaelite scandal. While the Morris/ Rossetti affair was a bit more on the private side, the Ruskin-Effie-Millais ruckus made the papers and had Victorian England gossiping.


So...what exactly happened?  Why all the fuss?

At least it would result in a happy ending for two of the above...

John Ruskin, the famous art critic and philosopher, married young Euphemia (Effie) Gray.
(Here's a previous cartoon of mine, below) 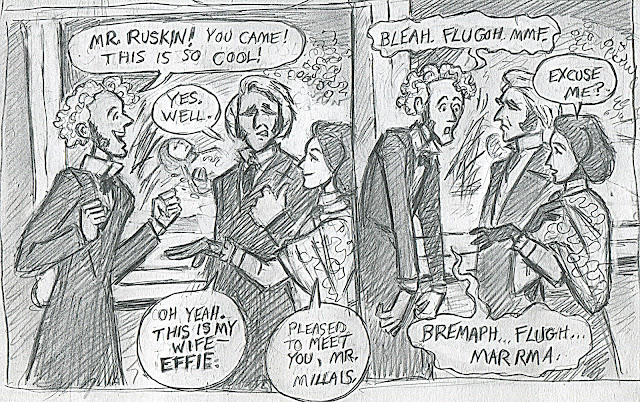 John Ruskin famously championed the new and radical Pre-Raphaelite art movement and its members. He was especially impressed with their youngest member John Everett Millais, who just so happened to be the same age as Ruskin's own young wife.

Millais used Effie as the model for a very successful painting called "The Order of Release"... which proved to be a very prophetic title.

While working on this painting, Millais and Effie became very, well, close. And Effie revealed to Everett a very strange secret: she and her husband, Ruskin, had been married for five years and their marriage was still unconsummated.


Effie confessed that Ruskin had been "disgusted" with her on their wedding night, being taken aback that women in the flesh were not at all like the classical nude statues he had studied. (Apparently, Ruskin had never drawn from live nude models.)  Over time, when no children were forthcoming from the marriage, Ruskin made excuses that the problems were all associated with his wife. Effie was at her wits' end and wanted out. But divorce was a stigma for a woman in this era.

Ruskin invited Millais to join his wife and himself on a trip to Scotland where Millais would begin to paint this famous portrait of the celebrated man. (right)

Ruskin oddly enough seemed to leave Millais and his wife alone together many times, almost as if he was tempting fate.

Millais supported Effie's decision to seek an annulment so she could marry him instead. But this would prove to be an agonizing process.

For annulment proceedings to begin, Effie had to submit to a humiliating virginity test to prove her claim of non-consummation, as well as having to endure the scorn of the public. To make matters worse, Ruskin claimed she was mentally unstable.

When Effie's claims were proven conclusive, the annulment was finally granted and she was free to marry Millais. Ruskin, to his credit, did not bad-mouth his estranged wife, but instead fled to the continent to avoid further public humiliation. His sights would soon be turned toward supporting other Pre-Raphaelite artists-- notably Dante Gabriel Rossetti, Lizzie Siddal and Edward Burne-Jones-- but he was professionally through with John Everett Millais... with the exception of  continuing to pose for his "wretched" portrait.

Effie and Millais wasted no time and had about nine children, making Millais turn to more commercial work such as portraiture and illustration to support their growing family. However, due to her previously-married status, Effie  was still shunned by some of the aristocracy, even after her husband was knighted.

It was Millais' dying wish that Effie would finally be received socially by the prudish Queen Victoria, who frowned upon divorced women.


As for what happened next in John Ruskin's love life, that's another long story.

Coming up next: Young Topsy and Ned.

Posted by Raine Szramski at 1:09 AM