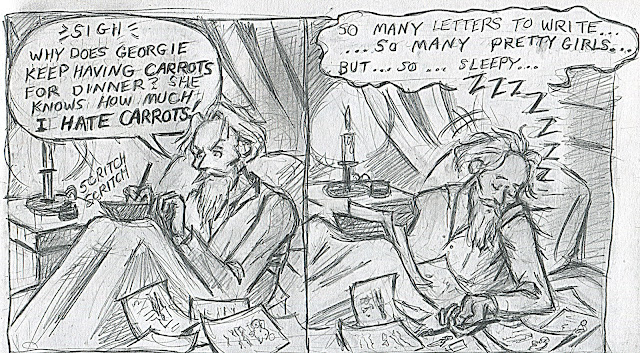 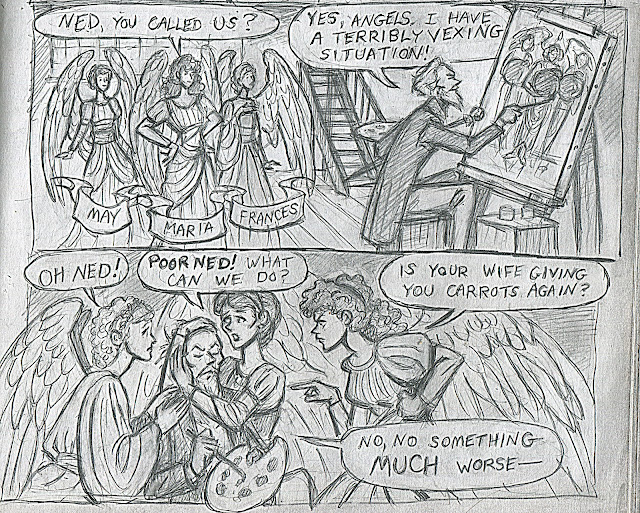 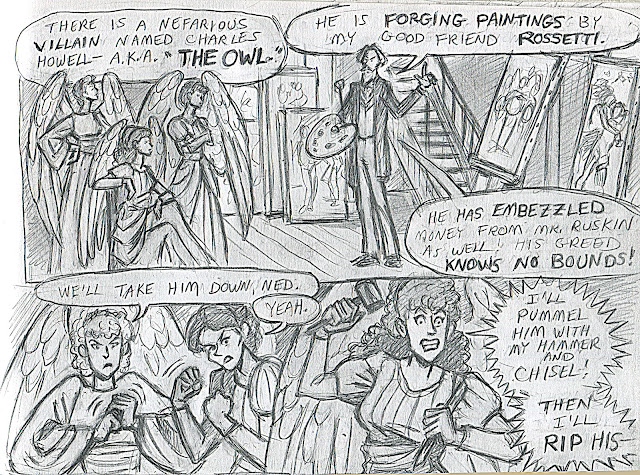 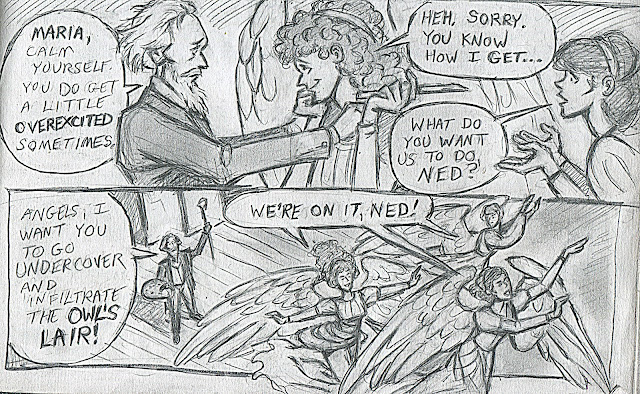 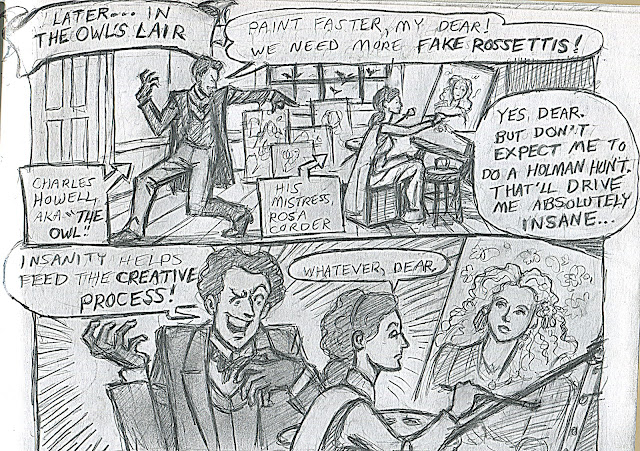 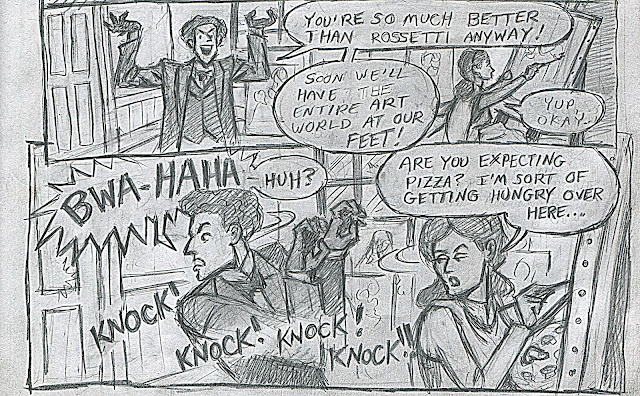 The genesis of this cartoon was seeing an illustration on the cover of the British Literary Review. There was an article inside about Fiona MacCarthy's recent biography about Edward Burne-Jones, The Last Pre-Raphaelite. (Highly recommended!) and the cover illustration showed the painter flanked by three lovely angels (angels being one of Ned's favorite subjects). I joked online that they were "Ned's Angels" and they should start a crime-fighting team.

Well, that was enough for me to get this foolishness started...

different points of time, most notoriously Maria.  And oh, that's quite a story..

Ned, as I've written before, had a eye for pretty girls. But he had been a good husband and father until
it all seemed to roll out of control when he inadvertently fell in love with one of his models.


Maria Zambaco was a divorced sculptor
of Greek descent and was very much
unlike any other woman Ned had
ever come across before.

She was basically a force of nature
who had some trouble taking "no" as an
answer when Ned finally told her he
wanted to end the affair and return
to his wife, Georgie.


The famous tale is that he and Maria went
walking one foggy night by the canal
and Maria had two bottles of laudanum
ready for a double suicide.

When Ned said he wasn't prepared
to die with her, she ran for the river
to throw herself in. Ned  tackled her to the ground
to stop her and they were wrestling
with each other when the police showed up
and Maria's cousin appeared
(he may have been following the couple at a distance)
to escort the frantic woman off.

However, the end of the affair led to some of the most amazing and controversial paintings of Burne-Jones' career-- and finally he was out of the shadow of his mentor, Dante Gabriel Rossetti and best friend William Morris. He would finally become a celebrated and successful artist in his own right, with his own individual, dreamy and very recognizable style.


.
But there was a definite "femme fatale" theme that was showing up in Ned's art, alongside his constant androgynous angels and swooning maidens.
Since the the Maria Zambaco affair, it seemed some sort of  amorous door had been opened for the formerly shy painter who became a  relentlessly platonic flirt. He wrote increasingly adoring letters to young female friends. Though he remained with his loyal wife Georgie (their relationship was obviously never the same and possibly why Georgie sought comfort in the company of her husband's best friend, William Morris, who was going through a similar experience), Ned acted like a knight in the throes of courtly love, knowing he would never have these women he poured out his passions to in letters but feeling compelled to write them all the same.

Ned pretty much fell in love on a daily basis.

It's my personal belief though that these "crushes" actually helped his art and gave him just the right amount of romantic enthusiasm he needed to create as much work as he did in later life. Let's just say that his crushes powered his passion at the easel.

But as a big fan of Georgie, I am also very sorry for her as well. Ned relied on her as his manager: she handled all his money, his commissions, his guests, the press, etc. She created the ideal environment in which he could essentially live in his dream world and work.

(However, she and William will have their moment in an upcoming cartoon.)

Oh, and Ned Burne-Jones hated carrots. As recorded by his studio assistant, Thomas Rooke, Georgie was discussing dinner preparations with her husband and remarked, "Relations are strained between you and carrots, aren't they, dear?" To which Ned replied: "Carrots and I are not on speaking terms. When I see a carrot in the street I walk on the other side. Potatoes and I are on speaking terms merely, there's no friendship between us,"  (Burne-Jones Talking, Mary Lago, editor.)

Coming up next: A Pre-Raphaelite Supervillain!  And the conclusion of "Ned's Angels". 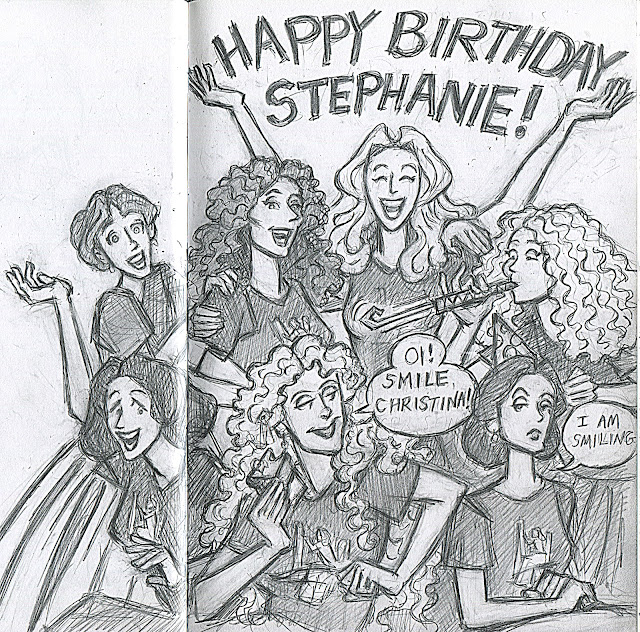 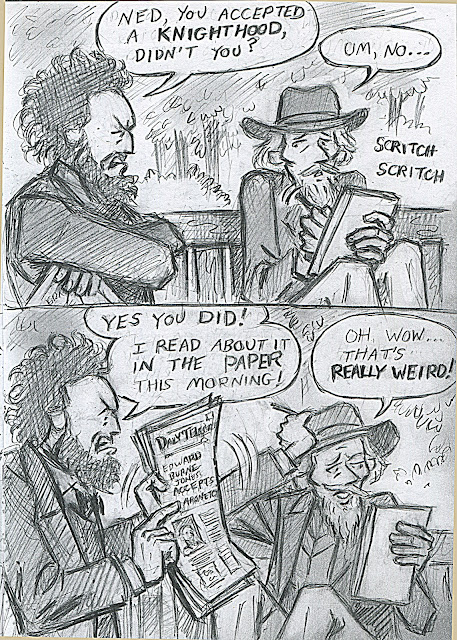 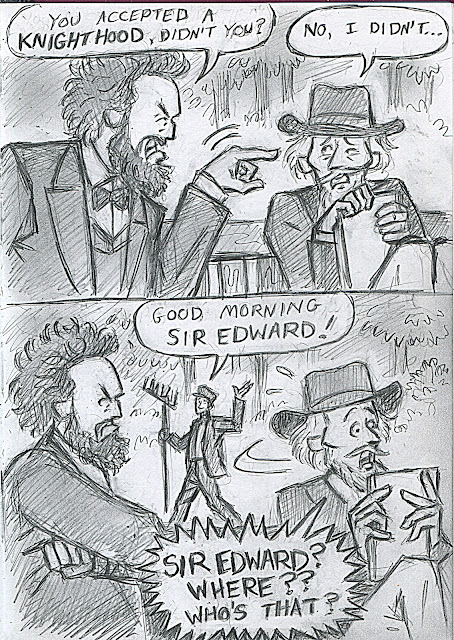 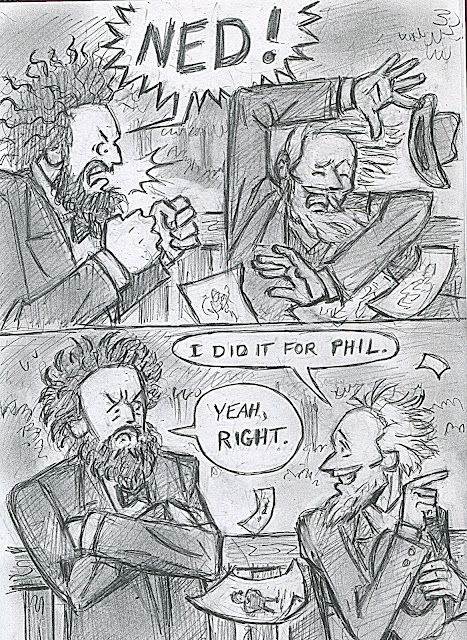 Actually, at this point in time, William Morris' hair should be completely white and Burne-Jones will need glasses for sketching (He'd had an eye operaton...Victorian eye operations, brrrrrr...) but I of course threw most realistic historical details out the window long ago.

In my previous post, we saw that both men as boys were enamored by the romance of knights and chivalry. While as adults they both loved the same stories they had read years ago (Morris even wrote his own) their politics couldn't be more different.

William Morris was a very vocal member of the Socialist League.

While Georgie Burne-Jones, Ned's wife, shared
Morris' views, Ned himself wanted nothing to do
with politics. Infact, when he was offered a baronetcy
that would add the title "Sir" to his name, he
desperately hid his acceptance from Topsy
(who would throw a fit) as well as his wife,
who probably threw an even bigger fit for
having "Lady" added to her name.

Infact, Morris finally did find out about his best friend's
knighthood from the newspaper. He at first
refused to believe it.
Ned's alleged reason for accepting a knighthood?


He did it for his son, Philip, who would inherit the title.
Philip was also a painter who enjoyed the
good life a little too much.

(You can see a younger version of Phil at the
easel in the above painting of his mother...) ﻿

Topsy's final verdict on the situation?

Coming up next: I think we're finally ready for the craziness of "Ned's Angels"...

Posted by Raine Szramski at 11:48 AM No comments: