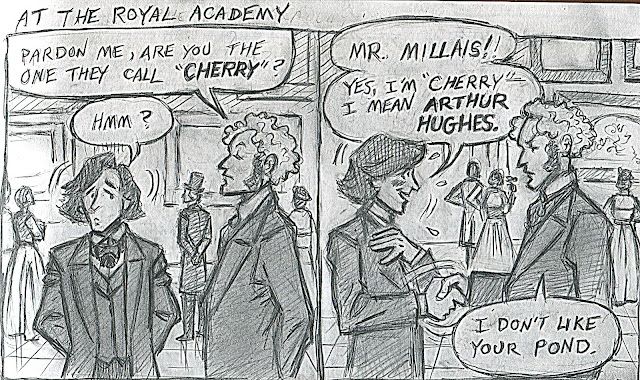 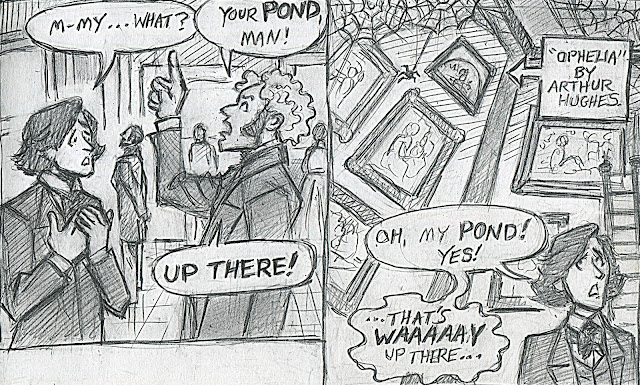 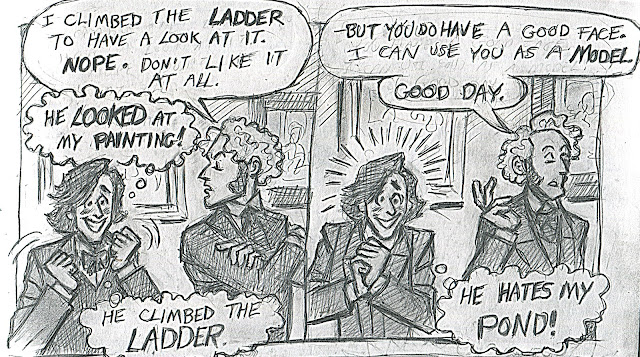 Based on a true story.

Everyone agreed that Arthur Hughes was an Incredibly Nice Guy. He was known for his graciousness and modesty. William Michael Rossetti had this to say about him :

“If I had to pick out, from my once numerous acquaintances of the male sex, the sweetest & most ingenuous nature of all, the least carking & querulous, & the freest from envy hatred & malice, & all uncharitableness, I should probably find myself bound to select Mr Hughes.”

He also had a very happy marriage, five children and wasn't particularly concerned if he had fame or fortune as long as he and his family were comfortable. This of course makes him the complete weirdo of the Pre-Raphaelites.

Hughes once returned a check one of his patrons paid him for a painting, writing that she had paid too much and to please write him a new one as he couldn't possibly accept such an exorbitant amount. I don't think I could be ever be that modest....

Arthur Hughes was not one of the official Brotherhood, of course, but he was a devoted follower of The Germ (a sort of Pre-Raphaelite magazine published in the early days of the PRB, full of reviews, PRB philosophy and poetry. With pictures, of course.) He would later become acquainted with Dante Gabriel Rossetti through Walter Deverell (Pre-Raphaelite friend and auxiliary member of the PRB who is probably most known for having discovered Elizabeth Siddal working in a hatshop and being the first artist to hire her as a model.)

Arthur Hughes' first version of Ophelia had the bad timing to be hung at the Royal Academy at  the same time as John Everett Millais' more famous rockstar version of the same subject.While Millais gained quite a lot of deserved fame from his Ophelia, Hughes' version was relegated to the Octagon Room, called by the resident artists "The Condemned Cell". Not only was it in a terrible location, it was hung extremely high up ("above the line") where it could only be observed with the use of a ladder. This, sadly, would be the fate of many of Hughes' future paintings at the Royal Academy.

However, young Arthur was resigned to his fate but was astounded when his hero, the older former student Millais (with whom he had never spoken) wandered over and asked him if he was "Cherry". (Arthur Hughes' artist friends had given him this nickname because he frequently blushed.) Millais told him that he had indeed climbed the ladder to look at his version of Ophelia and that it had given him "more pleasure than any picture there".

Millais enlisted Arthur Hughes to pose for his painting, The Proscribed Royalist, 1651 (below):
﻿﻿
Arthur Hughes quickly became known for his Millais-inspired paintings of couples in love and delicately rendered maidens-- many done in his trademark purple and green. Infact, his most well-known painting April Love was bought by William Morris-- who sent a grumbling Edward Burne-Jones to scurry off and purchase it for him before anyone else did. (He'd heard John Ruskin wanted it.)

When Walter Deverell introduced Hughes to Rossetti, Rossetti was delighted by Hughes' Ophelia. (Deverell complained that he hated the somewhat sinister addition of a bat flying above the stream in the painting; but of course animal-loving Rossetti proclaimed  it to be one of his favorite things about it.)

Rossetti enlisted Hughes among others (including young William Morris, Edward Burne-Jones and Valentine Prinsep) to help paint the murals in the Oxford Union Hall that famously began to fade because the young artists failed to prepare a proper protective "ground" on the walls first. (And revealed underneath the fading paintings were some wombat cartoons, proving that the Oxford Union gang wasn't above having a good time.)

﻿﻿Arthur Hughes would go on to do a second version of Ophelia (left) and produce an incredibly huge amount of work that also included book illustrations. He most famously did illustrations for Victorian fantasy writer George MacDonald (Phantastes and The Princess and the Goblin.)
﻿﻿﻿

One of his biggest fans and later a good friend was Charles Dodgson (Lewis Carroll), who became a sort of "uncle" to Hughes' children and frequently photographed them.

Arthur Hughes would always remain a well-liked and lifelong friend to many members of the PRB as well as the "Second Phase" PRB, led by Morris and Burne-Jones. Cherry's cheerful, self-effacing and non-competitive demeanor was probably refreshing for everyone.