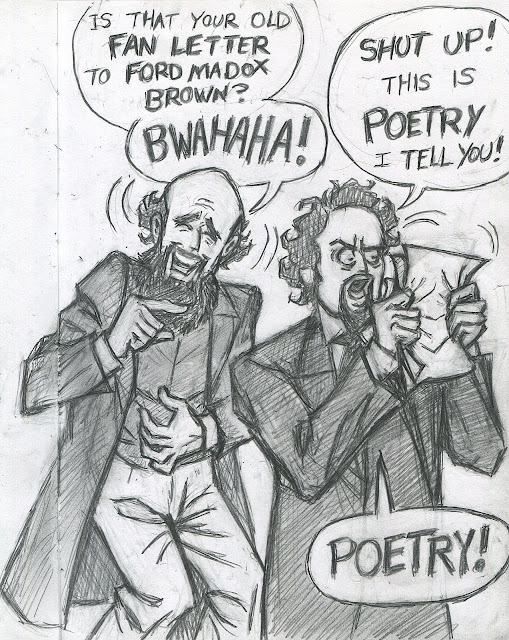 This is the accompaniment to the previous post, Ford Madox Brown Meets Young Rossetti.
I did this cartoon for Verity Holloway after she went to the trouble of tracking down and emailing me a copy of the full letter, which, for the life of me, I couldn't find excerpts of in any of my books. (I think I owe her another cartoon for that...)

This is Dante Gabriel Rossetti's younger brother, William Michael, fellow early PRB member who actually went on to marry Ford Madox Brown's oldest daughter Lucy. (Lucy was taught by her father and went on to become a painter in her right, as did  her younger half-sister Catherine. Brown himself didn't skimp on educating his girls in his techniques.)

William Michael will pop up again-- so far I've only depicted him being disparaging of Rossetti's model Fanny Cornforth here.

Coming up next: Lizzie's Trouble With Ruskin.

Posted by Raine Szramski at 8:05 PM No comments: 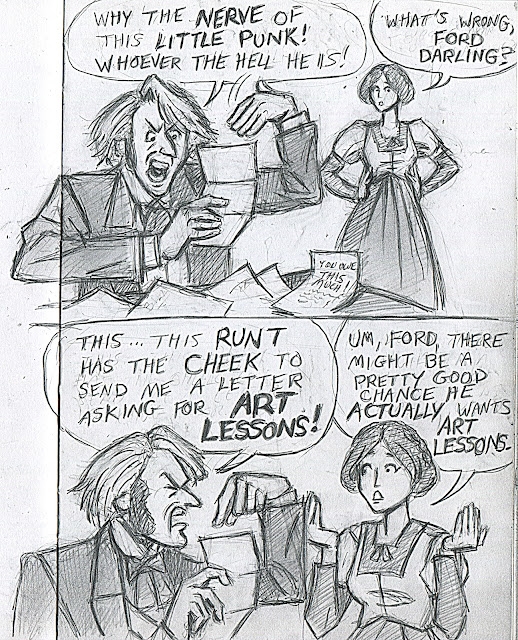 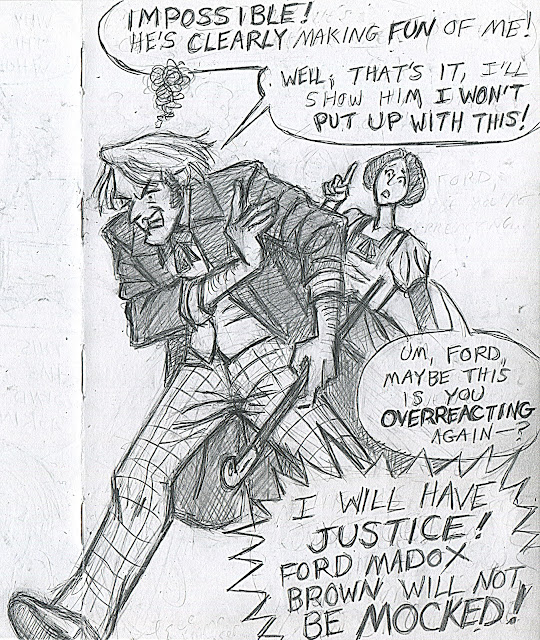 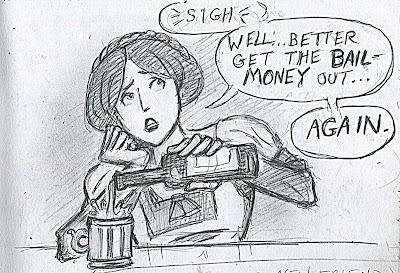 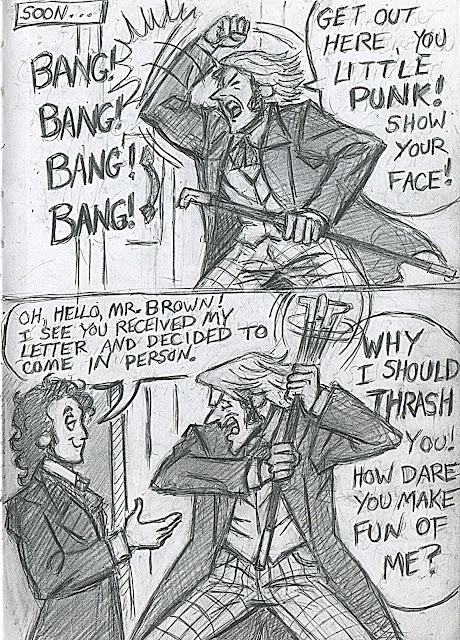 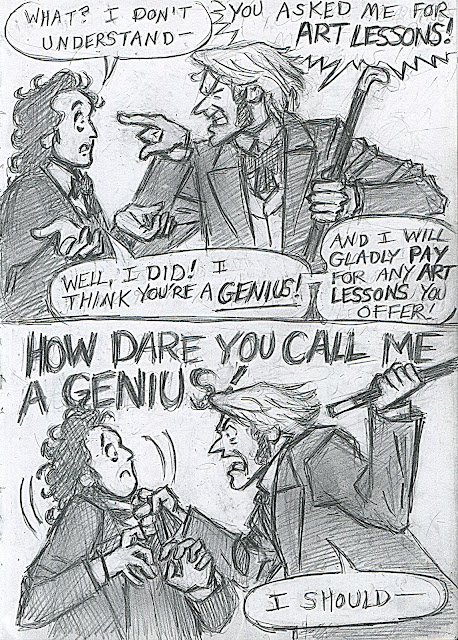 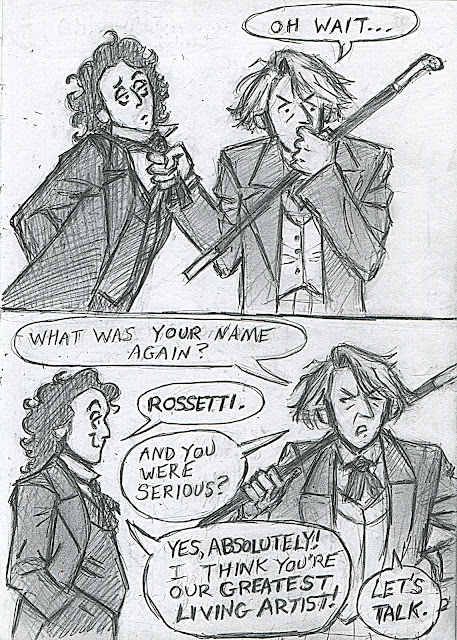 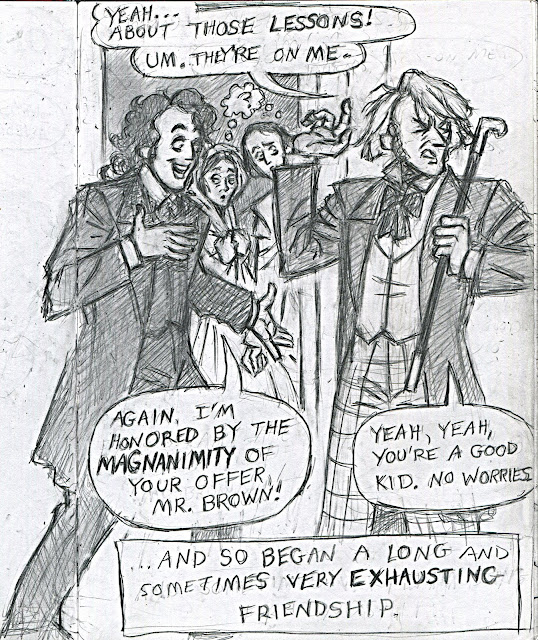 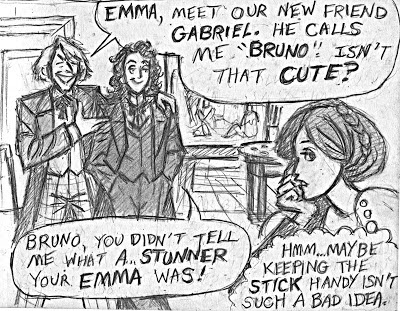 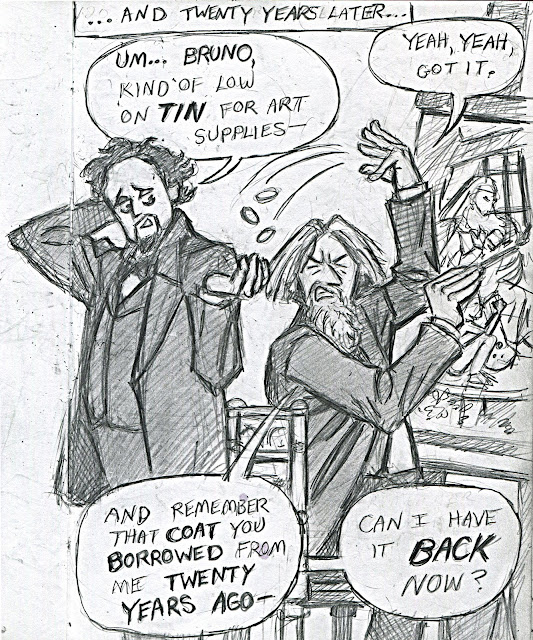 ﻿
﻿
I had just finished reading Into the Frame: The Four Loves of Ford Madox Brown by Angela Thirlwell and I felt the need to show how Ford Madox Brown met Dante Gabriel Rossetti (back when he still signed his name Gabriel Charles Rossetti). This misunderstanding and ensuing confrontation actually happened but of course not in as silly a way as shown above.

Ford Madox Brown made a brief appearance in one of my earlier cartoons, getting into a row with William Holman Hunt. (We'll get to their real antagonism towards each other shortly...) 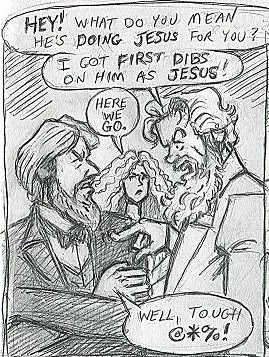 Rossetti, being Rossetti, would end up charming his ﻿﻿﻿﻿﻿﻿﻿﻿perplexed would-be art teacher. Featured in the  cartoon, we also meet Emma, Brown's model and soon-to-be wife.  Later on, in the doorway behind Rossetti, is his mother Frances Polidori (sister to Lord Byron's infamous doctor) and younger brother William Michael (with some hair this time) who would also become one of the original seven PRB brothers.

Ford Madox Brown was a well-traveled artist who had been schooled on the continent rather than the Royal Academy, so his paintings had a decidedly different, even old Flemish, flavor from what the Academy endorsed.﻿﻿﻿

This made him all the more fascinating to young Gabriel who made it his mission as a young man to rebel against the Royal Academy (where he was known as "The Italian") in any way he could. This included the way he dressed (shabby, dark clothes that were excused by everyone as "bohemian") to what artwork he favored (he was fond of medievalism.)

Because Brown had not studied at the Academy in England, but rather in Belgium, Italy and France, the older man had a pre-Renaissance flair to his painting style that intrigued the young, bored student of the Academy's Antique School.

It is argued that the older man was the first Pre-Raphaelite (even if he wasn't officially a member of the original PRB) and that his style would influence the entire Pre-Raphaelite movement to come.
﻿﻿
Ford Madox Brown, at 27, was already a widower with a young daughter and later had a favorite live-in model named Emma Hill, who would become his second wife. Despite receiving excellent reviews for his work, he sold very few paintings. He was too different, too continental, and thus was deemed unfashionable. He often chose epic, historical scenes as his subjects as well as themes from literature, such as Chaucer and Byron.

But he was best at depicting truthful, unidealized people. This style became something the future PRB would adapt to much early scorn and derision.
Rossetti decided at once that Ford Madox Brown should be his teacher.


Now, Rossetti, being Rossetti, couldn't just ask his hero for lessons in a straightforward, politely condensed note. He went very over-the-top with a rambling fan letter full of hyperboles and florid praise that made Brown think that this had to be a joke. Brown was struggling financially and nobody seemed to want his paintings. Also, he worked too slowly and meticulously on each painting, frequently second-guessing and correcting himself. Though he remained true to his vision and not caving in to fashion, he was still not pumping out art fast enough to support himself. Moody and depressed, Ford took offense at the snot-nosed kid who was clearly mocking him.


At his point, I want to thank the awesome Verity Holloway, fountain of knowledge for all things Rossettian, for her assistance in finding the actual letter in its entirety and taking the time to email it to me. Some highlights:
"Sir,--
I am a student in the Antique School of the Royal Academy. Since the first time  I ever went to an exhibition (which was several years ago, and when I saw a picture of yours from Byron's Giaour ) I have listened with avidity if your name happened to be mentioned, and rushed first of all to your number in the Catalogue..."
He goes on to list the "glorious works" Brown had exhibited which "successively raised my admiration and kept me standing on the same spot for fabulous lengths of time."
Yes, he does use the word "fabulous". Read on.

He tells how he hung up on his wall Brown's published Abstract Representation of Justice (with an accompanying engraved illustration) and that it was the "sole adornment of my room". And in a long tangent, he goes on to describe his humble room: "Small and bare and uncared-for it was, but how many hours which in retrospect seem glorious hours, have I not passed in it with my brother! How many books have we not read to one another..." Etc, etc.

Now we get to the actual point of the letter:

"It is not therefore to be wondered at if, wishing to obtain some knowledge of colour (which I have as yet scarcely attempted), the hope suggests itself that you might possibly admit pupils to profit from your invaluable assistance. In such is being the case, you would do me the honour to inform me what your terms would be for six months' instructions, I feel convinced that I should then have some chance in Art.
--I remain, Sir, very truly yours,
Gabriel C. Rossetti"
You can just imagine Ford Madox Brown's reaction to this. "You've got to be kidding me."

After confronting Rossetti with his stick in hand, he soon came to the realization that this was not exaggeration on the younger man's part, that this was just how the kid talked. He was invited in by the Rossetti family, given the name "Signor Bruno" (Italian for "Brown") and agreed to tutor Rossetti, waiving any fee that was proposed. From Brown, Rossetti would first hear of a brotherhood of German Romantic artists called the Nazarenes, whose movement would become inspirational to another group soon to be started in secret.

Over the years, Brown would show considerable generosity to his former pupil, lending him money and advice and, yes, his coat.

The kicker to all this was that even after Brown began giving his new young friend lessons (for free, remember!) Rossetti became bored of drawing and painting educational still-lifes and promptly
enlisted a new teacher. This would be William Holman Hunt, his fellow PRB co-founder and also a Royal Academy student who shared his love for pre-Renaissance art.
Holman Hunt and Brown viewed each other with distrust and it was one of the reasons Brown was not invited to officially join the secret Brotherhood... not that he was into such foolishness...
Brown was understandably angry (not to mention hurt) but still managed to remain one of Rossetti's most loyal friends throughout his life.

Coming up next: Fanboy Rossetti.

Oscar in Color for Graphic Classics 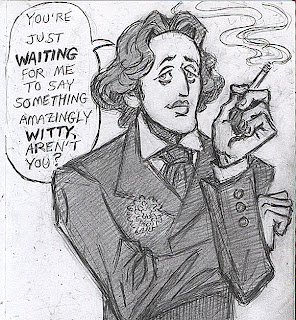 About a month ago, I was asked by Tom Pomplun of Graphic Classics to do a variation of my Oscar Wilde cartoon to use as a bookmark to accompany their volume of Wilde stories done in graphic novel format.

I had done a cartoon for Oscar's birthday months ago which he had seen and liked... (despite my accidentally making Oscar left-handed...)


He asked if I could do a version of it in color and obviously change the format to fit a bookmark.

The official Graphic Classics bookmark version won't be out until the beginning of 2014 but the Oscar Wilde volume it will accompany is available here.


Coming up next: Yes, this time I promise it's the Ford Madox Brown one...