Posted by Raine Szramski at 2:15 PM No comments: 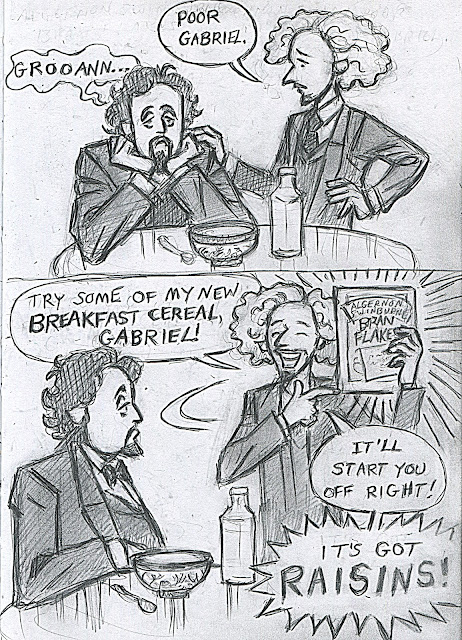 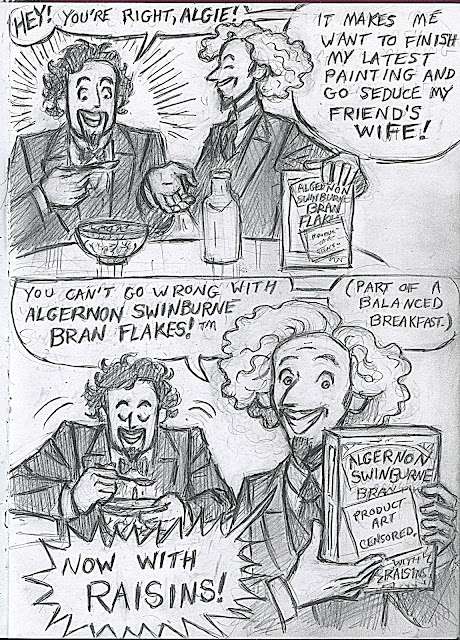 This cartoon really has no historical basis to it whatsoever except for perhaps Dante Gabriel Rossetti being frequently depressed and in ill health later in his life--and for Algernon Swinburne being an odd little man. Also, I later discovered after I drew this that Rossetti was actually fond of a bowl of raisins now and then. (Thank you, Phillip Brown.)

The story of this silliness was that I had been reading about Swinburne online, wanting to know a little more about him. Naturally this went into my subconscious and I had a dream that night that someone knocked on my door and handed me a bag of groceries. (No one delivers groceries to  my door, I go out and buy my own.) In the bag was a cereal box with Victorian designs and lettering which read: "Algernon Swinburne Bran Flakes (With Raisins)".

When I woke up I took this as a sign that I needed more fiber, iron and decadent poetry in my diet. And so I bought some raisin bran.

So, after mentioning the goofy dream on Facebook, I decided to draw the official tv commercial for Algernon Swinburne Bran Flakes™  ... and this is the result. (I made sure to try to show Rossetti eating from a Blue Willow cereal bowl. He collected Blue Willow china.)


Algernon was a poet, critic and scholar who also became quite famous for his unconventional lifestyle. He was a tiny man with a wild mane of red hair and despite being seemingly fragile, he was a great swimmer and climber as well as an expert equestrian.

But he also had self-destructive tendencies, living the life of a Victorian wild child, getting drunk, partying and reading the Marquis de Sade. Infact, he was fond of pain all around and sought it out at special establishments for the purpose. A good friend of most of the Pre-Raphaelites (Burne-Jones called him "Little Carrots"for his hair), he could alway be counted on to liven up a party by doing something completely off-the-wall-- like sliding naked down a bannister. Ouch.

Despite this all, he was however very fond of and gentle to little children... and Lizzie Siddal, whom he adored. The two would be found laughing, talking and playing games together and this made Rossetti, as Lizzie's fiancé and later husband, relieved she had a "playmate" who actually seemed to make her happy. The two redheads would draw curious looks whenever they went out together for dinner.

After Lizzie's death, Algie and several others lived together in Rossetti's big house in Cheyne Walk (along with all of Rossetti's animals.)  After too many near-fatal incidents due to to his excesses, Swinburne was taken in by a friend to dry out and adopt a healthier lifestyle, and it was with this friend that he remained for the rest of his life. He did not associate with his old Pre-Raph buddies again, almost being kept under house arrest by his caregiver.

Currently, Swinburne has been popular as a character in works of modern science fiction and fantasy. In Elizabeth Hand's Mortal Love, he is part of a cast of characters who encounters a hauntingly sensual artist's muse; in Tim Powers' Hide Me Among the Graves, he and the entire Rossetti family encounter a deadlier type of muse that requires blood. And in Mark Hodder's steampunk adventures, he even becomes an action hero sidekick to Sir Richard Burton (whom he was a friend of, in reality) with his tolerance and enjoyment of pain being his "superpower".

And yes, the mouse in the classic science fiction story by Daniel Keyes,
"Flowers for Algernon", was named after him.


Coming up next: Lizzie and Algernon. 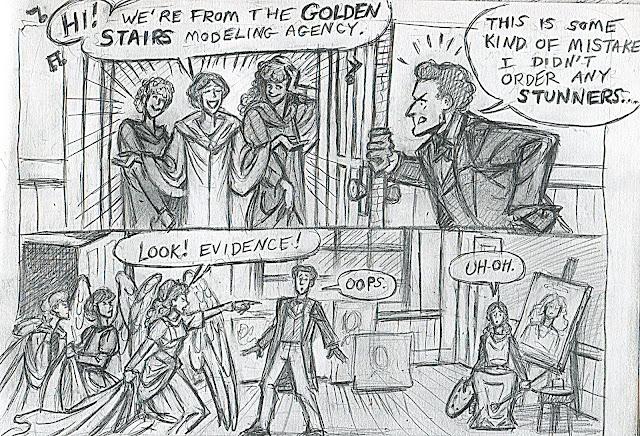 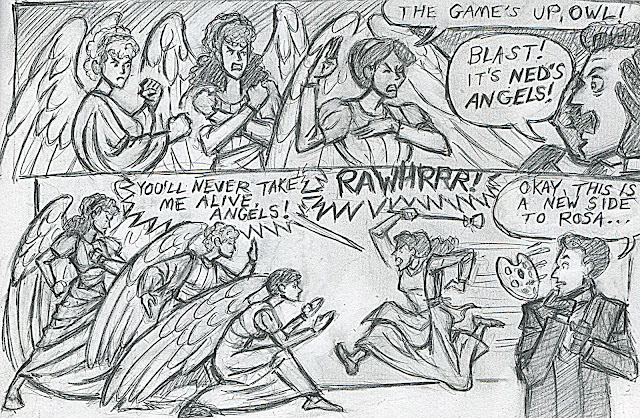 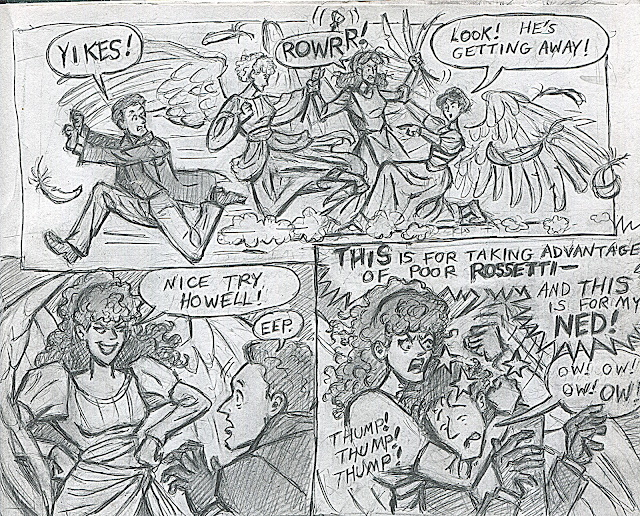 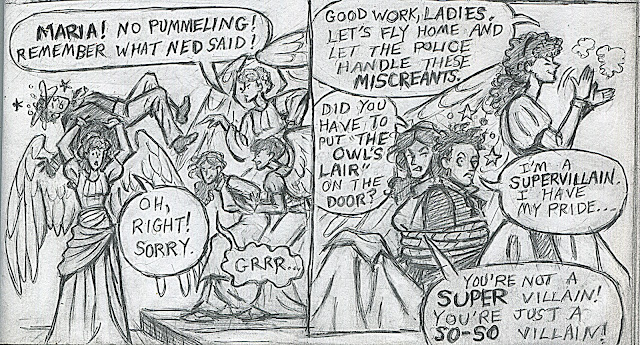 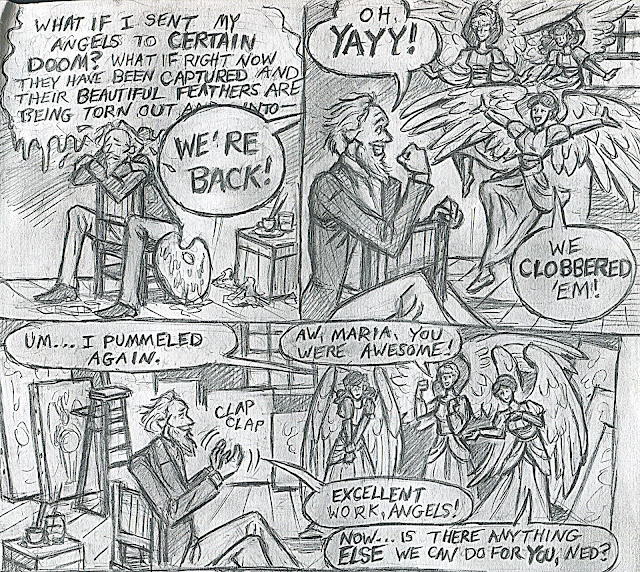 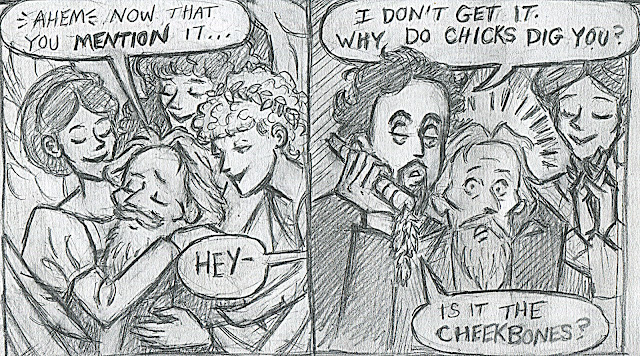 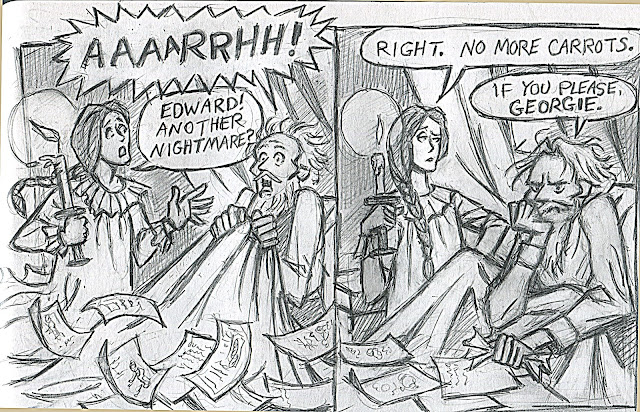 This cartoon got a little out-of-hand and wandered into the Three Stooges realm of goofy violence, but I have to admit it was fun to draw. Here we introduce a Pre-Raphaelite supervillain...

Charles Augustus Howell  was a very naughty fellow. (For an excellent and very entertaining post about him, I recommend Kirsty Walker's: http://fannycornforth.blogspot.com/2012/01/whos-been-naughty-boy.html)

He was an alleged blackmailer who inspired Arthur Conan-Doyle's Sherlock Holmes story, "Charles Augustus Milverton". He was described by Edward Burne-Jones as "a base, treacherous, unscrupulous and malignant fellow". Even Algernon Swinburne called him "the vilest wretch I ever came across". (Pretty strong words from a guy who idolized the Marquis de Sade.)

But probably his most notorious act was to convince an emotionally distraught Dante Gabriel Rossetti to dig up Lizzie Siddal's grave to exhume the book of his poems he had buried with his wife in his grief. And Howell completely orchestrated and was present at the actual exhumation.

He was originally a good and trusted friend to various members of the Pre-Raphaelite circle. Being a handsome man, he frequently modeled for Rossetti (he would later grow a distinguished and dastardly moustache). He earned his nickname "Owl", thanks to Fanny Cornforth's strong Cockney accent. When asked if she had seen him about town, she replied, "I see'd no 'Owl." After which, Burne-Jones affectionately called him "My pretty little Owl" (everyone seemed to have a big man-crush on this charming schemer) and trusted him with his business affairs... until Howell's nefarious side was gradually revealed.

Among his many misdeeds, Howell was said to be embezzling money from John Ruskin (a rich man, to whom he was briefly a secretary) who had entrusted him with handling charitable donations and instead was attempting to put himself solely in charge of Ruskin's estate. (Big mistake. Ned quickly convinced Ruskin to relieve Howell of his services.)

Howell also took up selling forgeries of Rossetti's art which were supplied by his mistress Rosa Corder, who was a talented artist.


After having faked his own death for financial gain (as any true supervillain in a comic book would do) Howell finally died for real under strange circumstances that have never been made clear. His official cause of death was "pnemonia" (in a nursing home), yet stories circulated that his throat had been cut and a sovereign  put in his mouth (symbolic for the accusation of slander) with speculation that this may have occurred after his death. No one will ever know for sure.

But it eventually became great material for Sherlock Holmes.

Posted by Raine Szramski at 1:54 AM No comments: