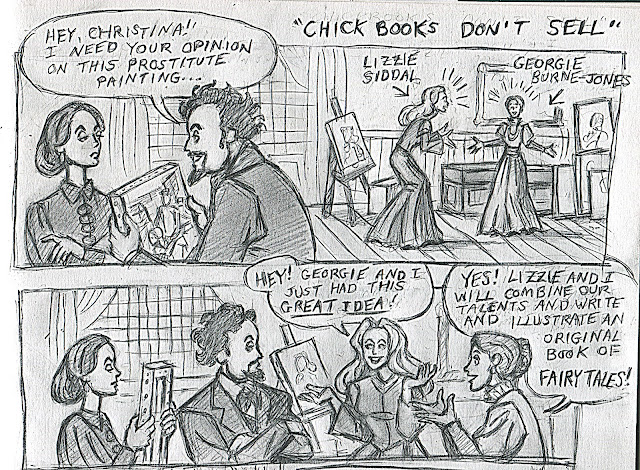 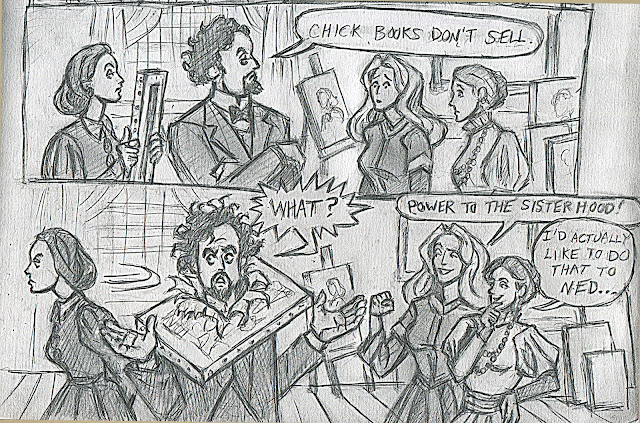 The night I was drawing this one in my sketchbook, there was a summer thunderstorm and the power went out. My sister had given me a metal candlelabra she'd found at a swap-meet that looks like something Lord Byron would have had on his writing desk, and I lit this for a properly gothic effect and finished this cartoon.

The Pre-Raphaelite Sisterhood consisted of artists, poets and models who were the wives, sisters and lovers of the Brotherhood.

The "chicks" in question here are:


Lizzie was an unusually striking, tall redhead discovered working in a hatshop by young PRB friend Walter Deverell, who was actually the first painter to use her as a model.  She would become the iconic image of the Pre-Raphaelites and brought previously reviled red hair into fashion.

She was introduced to the Pre-Raphaelite Brotherhood and was painted by all of them, most famously by Millais for his masterpiece, "Ophelia" which turned her into the equivalent of a Victorian supermodel.


However, there was more substance to Lizzie than just a pretty face. By nature she was dignified (but had a sense of humor) and could also have a fiery temper.  But she was a creative
soul in her own right.
It wasn't long however before she was in a relationship with Dante Gabriel Rossetti who also became her art teacher. Previously untaught but with great potential, even the famous art critic John Ruskin (see my post Millais' Big Night,   http://preraphernalia.blogspot.com/2012/04/millais-big-night.html ) took notice of her and became her patron.

Lizzie also wrote poetry, which became increasingly morbid as her tempestuous relationship with Rossetti worsened. She very briefly became his wife but died of a laudanum overdose (which may or may not have been a suicide.)


Coming from a celebrated family of sisters herself (the Macdonalds, whose marriages would produce, among other things, writer Rudyard Kipling and a prime minister), Georgie was small and steadfast as well as a talented artist... until she relinquished her own artistic ambitions after her first child was born.

Nevertheless, she handled her husband's career almost single-handedly and today would have been called his manager (not to mention his live-in nurse.)


In her old age,  she became quite feisty, campaigning for socialism and women's suffrage. She was a force to be reckoned with, like her good friend William Morris. (She hated having the title "Lady" added to her name when her husband accepted a baronetcy, much to her annoyance.)
More on her frustrating husband  Ned (Edward Burne-Jones) in future posts.

Sister of Dante Gabriel Rossetti, and youngest member of the talented Rossettis, Christina was an early model for her brother's paintings. She was deeply religious, very picky about her boyfriends (she was engaged twice and changed her mind), and was a celebrated poet.

Due to later ill health, she became a bit of a recluse yet still benefited from a colorful cast of characters who came in and out of her life, thanks to her brothers William and Gabriel, both founding members of the Pre-Raphaelite Brotherhood. And it was no secret that the lifestyles of Gabriel's increasingly eccentric crowd met with her disapproval. (Algernon Swinburne, famously decadent poet and buddy of her brother's, must have sent her into conniptions...)

Still, Christina's poetry was so highly regarded, she was one of the contenders for new poet laureate after Alfred Lord Tennyson's death. ﻿﻿


Her most famous work is "The Goblin Market" (here, illustrated by her brother Gabriel:)


There is sometimes a preoccupation with the theme of death in her poetry (and her solemn propensity for wearing black) that makes her a bit of a goth.

Christina was also said to have a bit of a temper as this cartoon by her brother Gabriel suggests, showing her reacting to unfavorable reviews of her poetry... 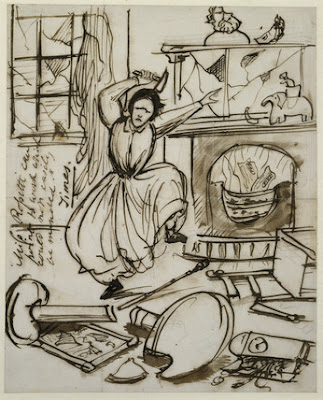 Lizzie and Georgie were great friends and it's true they had wanted to collaborate on writing and illustrating an original book of fairy tales. However, this was sadly unrealized due to Lizzie's tragic death. And Georgie, who had been studying to be an engraver in order to assist her husband, lost heart in her own work for many reasons, including a lack of support for her own artistic interests. (One of the many reasons why Lizzie was so important to her as a friend.)

Christina didn't bond with the other women in Rossetti's increasingly bohemian circle, staying indignant and aloof... but however writing one of her most beautiful poems about her brother's relationship with Lizzie Siddal:

In an Artist's Studio

ONE face looks out from all his canvasses,
One selfsame figure sits or walks or leans;
We found her hidden just behind those screens,
That mirror gave back all her loveliness.
A queen in opal or in ruby dress,
A nameless girl in freshest summer greens,
A saint, an angel;--every canvass means
The same one meaning, neither more nor less.
He feeds upon her face by day and night,
And she with true kind eyes looks back on him
Fair as the moon and joyfull as the light;
Not wan with waiting, not with sorrow dim;
Not as she is, but was when hope shone bright;
Not as she is, but as she fills his dream.

Christina's brother Dante Gabriel Rossetti wasn't really so unsupportive
of female artists-- infact, he was sometimes a little too supportive...


He encouraged female pupils who then often went to Rossetti's mentor, Ford Madox Brown, for more lessons. (Brown had two daughters who learned from him and became artists in their own right.) Women were notoriously excluded from almost all major art academies.

The painting that Gabriel is showing Christina is called "Found" (which he never finished... and no, not because Christina hit him over the head with it. ) 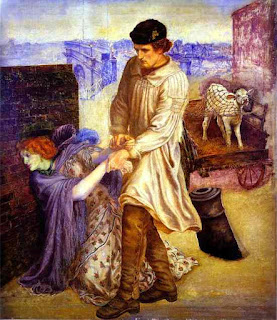 It's about a prostitute found on the street by a former love and Rossetti had become frustrated with it. (He was also angry at William Holman Hunt for beating him to the punch with this theme and becoming quite successful with the same idea.)

Christina, incidentally, would work with "fallen" women's charities in her lifetime, so she would have had an interest in Gabriel showing her this painting...

Lastly, the phrase "chick books don't sell" will be familiar to anyone who has worked in the comics industry in the past few decades due to the belief that no one was interested in comics by female creators or about female main characters.

Fortunately, this has been proven wrong many times over in the past 10 years.

Power to the Sisterhood.

Coming up next: The Sisterhood character sketches.
Posted by Raine Szramski at 4:30 PM