The Trouble With Ruskin 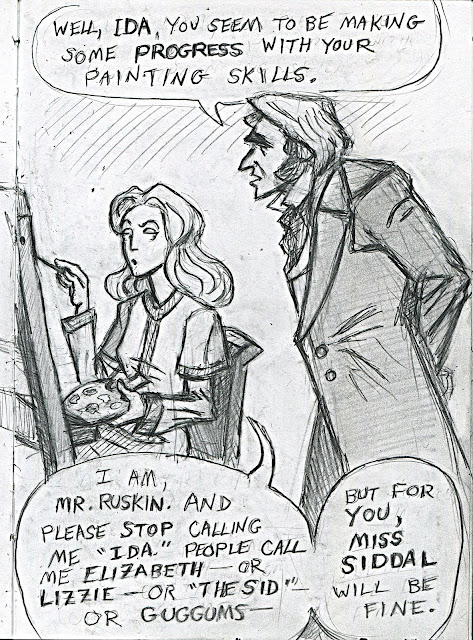 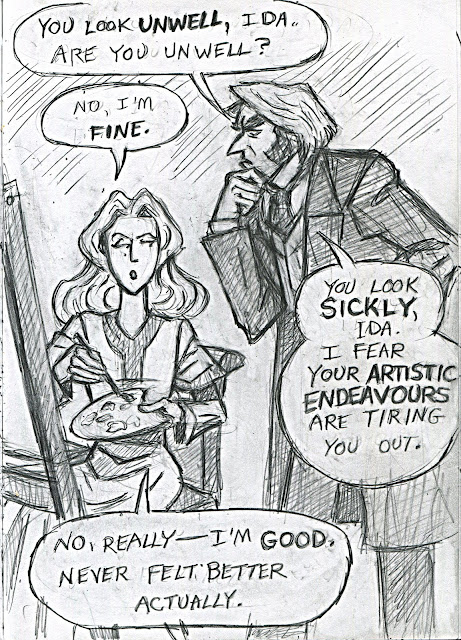 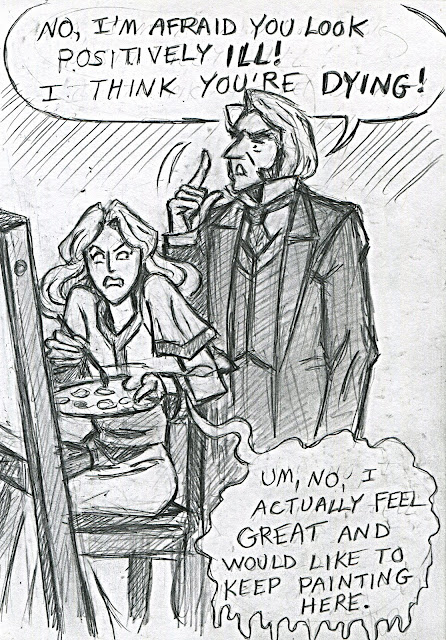 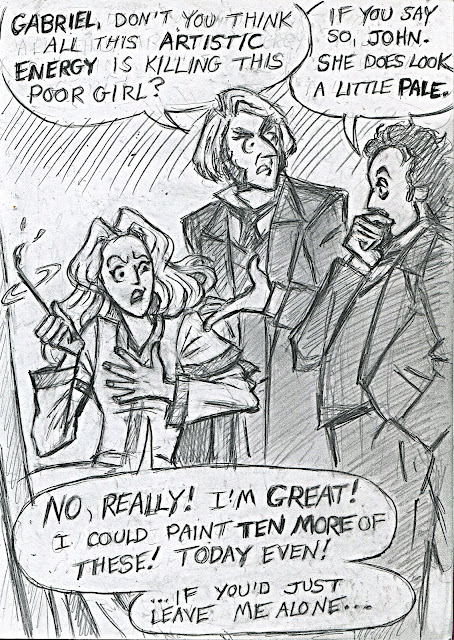 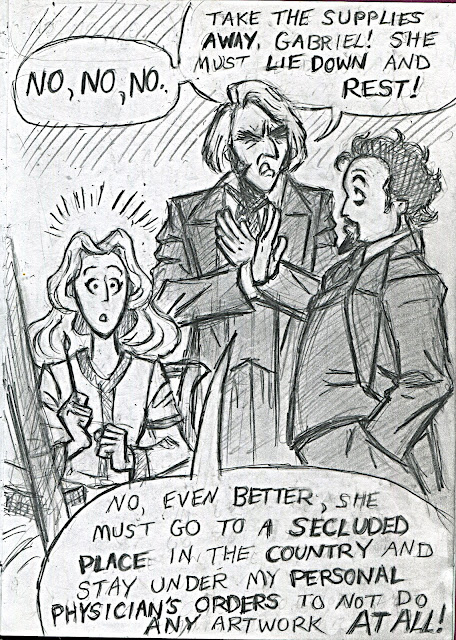 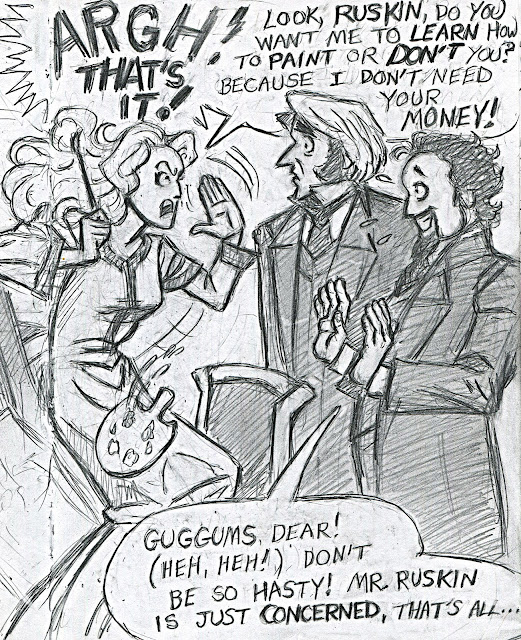 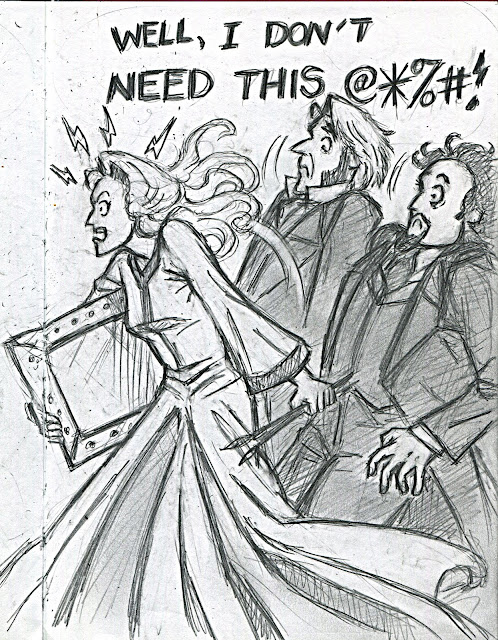 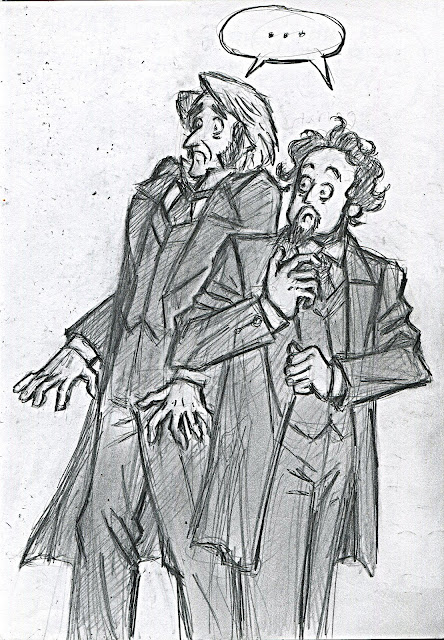 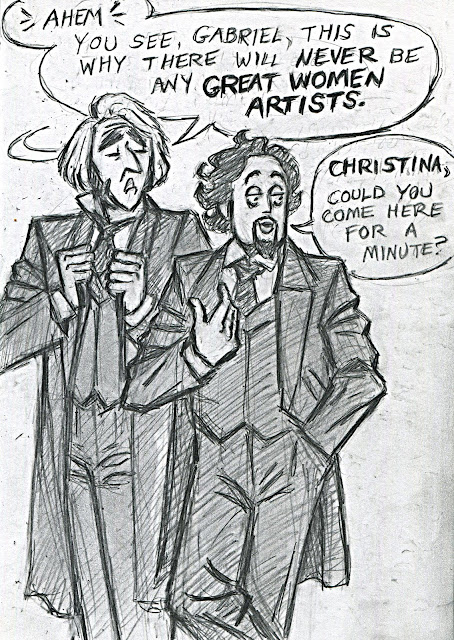 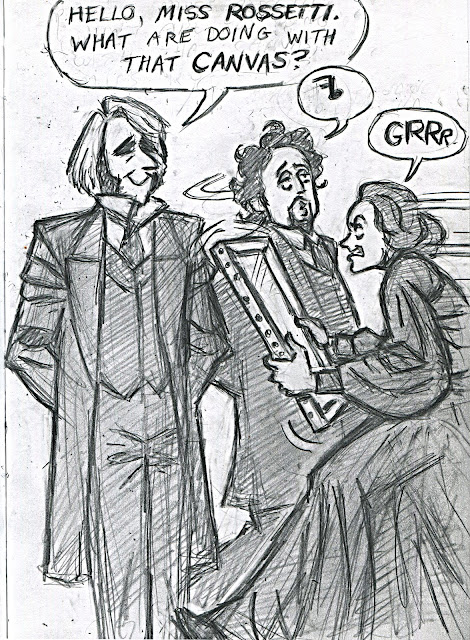 Actually, after I did this cartoon I discovered that John Ruskin always wore a white waistcoat which can be fixed later on in the inked version.

I had also played with the idea of Christina Rossetti emerging with her vengeful canvas whenever someone made a sexist comment. So far, this is only her second assault.

I first discussed Elizabeth Siddal's difficulties with Ruskin as a patron here.  Ruskin was indeed a stout advocate of artistic education for women and he was also very enthusiastic about Lizzie's potential, buying all the art she had produced upon seeing it. He proposed an allowance for her, along with his own instruction which included drawing lots of rocks.
(Ruskin was a huge fan of drawing rocks.)
Lizzie preferred to learn from Dante Gabriel Rossetti who was a much more laid-back teacher, who like herself worked mostly from intuition rather than from any academic training. According to Rossetti, she was at first reluctant to take an allowance from Ruskin, but when she finally consented, she used her first payment to buy art supplies.
Ruskin advised her not to draw from her imagination (which she loved to do).
He meant for her to hone her drawing skills, but it was deadly dull for Lizzie all the same. 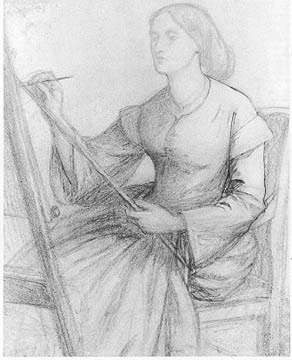 According to Pamela Gerrish Nunn and Jan Marsh's excellent Women Artists of the Pre-Raphaelite Movement, Ruskin considered life as a Pre-Raphaelite artist too overpowering for Lizzie's "feminine" nature and he frequently sent her away to warm climates, telling her not to overtax herself by doing any artwork at all.
This was obviously frustrating for her since the whole point of Ruskin's patronage was for her to become a better artist and to continue to produce paintings and drawings. Nevertheless, Lizzie still managed to rebel by continuing to draw and teaching herself to paint, as well as working from her imagination. Despite a tumultuous time in her relationship with Rossetti, this was her most productive period and she exhibited her artwork publicly alongside the male Pre-Raphaelite artists.

To be fair, Ruskin, (who was full of contradictions just like any other human being) was of course very capable of enlightened ideas (although approaching them from the position of someone with money and privilege.)  He was a generous man who offered financial assistance and education to the poor. He also advocated superior education for women ("Let girl's education be as serious as a boy's"). Despite dismissing the need for women's rights, he did reply that if women were supposed to be obedient and unquestioningly servile to men, it was akin to them being slaves. (This was bad.)

However...
There was his comment on a popular female artist:
"I never approached a picture with more iniquitous prejudice against it than I did Miss Thompson's, partly because I have always said that no woman could paint; and secondly, because I thought what the public made such a fuss about must be good for nothing."

And his actual advice to an aspiring woman artist:

"You must resolve to be a great paintress; there never having been such a being as a lady who could paint."

(Actually, there were quite a lot of ladies over the centuries who could paint that Mr. Ruskin seemed to have missed.)
﻿
﻿
He dismissed Georgie Burne-Jones' woodcutting attempts as something that would not "interfere with any motherly care or duty. I can't imagine anything prettier or more useful than cutting one's husband's drawings on a woodblock."

Despite this condescending remark, Georgiana and her husband Ned would remain quite fond of and loyal to Ruskin all their lives. One of Ruskin's acts of spontaneous generosity was to the Burne-Jones family when their second infant died, with Georgie nearly dying as well: he paid for the street infront of their house to be covered in hay to muffle the noise of passing carriages so that Georgie could rest and recover.

Of course, from the point of view of the 21st century, Ruskin's sexism seems crass. (As does this rejection letter from Disney Studios to a female artist in 1938 which basically tells her "No girls allowed".) To see a dismissal of women artists in actual print or said aloud is infuriating to our modern ears.

But Lizzie and other members of the Pre-Raphaelite Sisterhood put up the good fight.


Coming up next: The Stünners in concert!