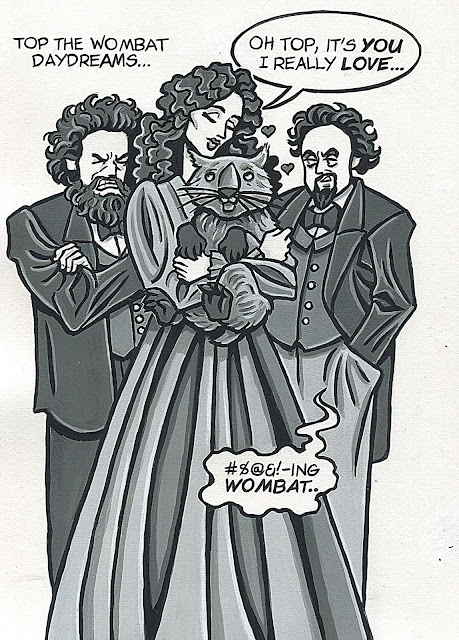 The infamous love triangle... er, quadrangle in this case.

Gradually I'm going through and inking the sketches and this is one of a couple that I've finished. 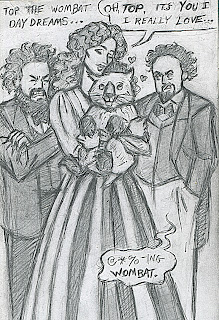 Even though Jane Burden married the wealthy and very busy William Morris, she would always have a thing for Dante Gabriel Rossetti, whom she met first and who was engaged to someone else (Lizzie Siddal.)
In later years, after Morris' death, she would admit to "never loving" her husband.

Morris was extremely aware of what was going on between his wife and his friend, but he was loyal to both despite this. Infact, he took himself away to Iceland and left Rossetti alone with his wife for great amounts of time.


Morris a a young man had also idolized Rossetti and (in keeping with Morris' love of medieval chivalry) it's also possible he thought of him as Lancelot to his King Arthur. But it does seem that Rossetti was more jealous of Morris than Morris was of him (as evidenced by Rossetti's increasingly snarky cartoons of his friend.)


And what does Top the Wombat have to add to this?
﻿﻿


Coming up next: Millais, Effie and Ruskin.