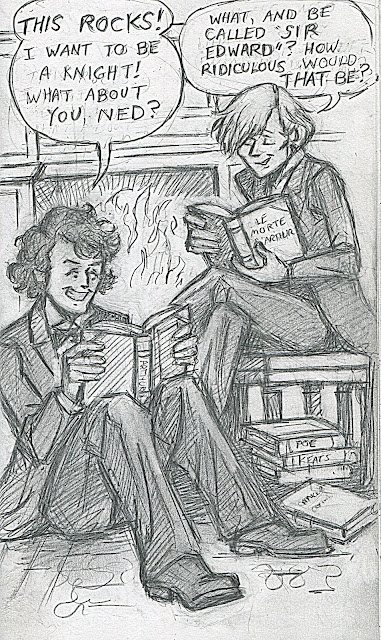 Young William Morris and Edward Burne-Jones were both students at Oxford University (Exeter College) where they bonded over their love for romantic literature and King Arthur's adventures.
There was a particularly beautiful edition of "Le Morte d'Arthur" in a local bookshop
that young Ned often went to drool over (well, not literally drool over, hopefully...)
His wealthy best chum surprised him one day by buying it for him.

Both boys (as well as all the Pre-Raphaelites) particularly loved the poetry of John Keats. And Ned (as well as Rossetti) was an avid fan of Edgar Allan Poe. (Ned would always have a fascination with the macabre despite having a lifelong problem with nightmares. More on this later.)

Morris would go on, of course, to write his own epic fantasy novels ( "The Well at World's End", "The Wood Beyond the World", etc.) that later would inspire Tolkien and C.S. Lewis.

The above cartoon was meant to be ironic of course. The affluent Topsy would go on to become a staunch socialist who wanted nothing to do with titles and the aristocracy, while the formerly poor Ned Jones was offered a baronetcy in later life and became Sir Edward Coley Burne-Jones. He said he accepted it for the sake of his son, Philip (who would also become an artist)
who would eventually inherit the title.

But I personally think Ned just liked the idea of being a knight--
even if he couldn't sit at the Round Table.

Coming up next:  Sir Ned.